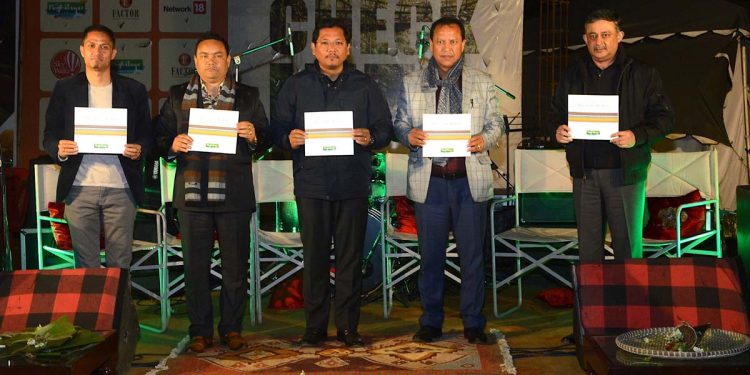 The Meghalayan Age event kicked off on Sunday at Thadlaskein in West Jaintia Hills.

The event, aims at branding and promoting Meghalaya on the world tourism map, will be underway till March 14 and will conclude with a “National Tourism Conclave”.

The event was conceptualised to be a gala affair, however, due to health advisory concerns, it has been scaled down.

The Sunday evening at the campsite took off to a colour note, wherein ‘The Meghalayan’ having stories of the state was launched by Meghalaya chief minister Conrad K. Sangma in presence of cabinet ministers Snaiwbhalang Dhar, Comingone Ymbon, and local MLA Wailad Shylla.

‘The Meghalayan’ is a compilation of the people who in their own way have contributed to the state, and whose stories will inspire generations.

Speaking on the occasion, Meghalaya chief minister Conrad Sangma said the Meghalayan Age is an attempt by the government to showcase the potential and uniqueness of the state.

“Through this event, we are trying to share with different stakeholders (tour operators, media, bloggers, etc) on the rich and diverse culture of the state and our people’s way of life,” the chief minister said.

Terming the event as “celebrating Meghalaya”, the chief minister said, “The entire base through which we have built up this list of Meghalayans has been on the basis of people who are passionate about what they do. It is not about the money, it is not about the fame, it is really what you believe in and what you really feel for.”

He opined that in years to come the event will be upscaled and will be promoted to attract visitors to the State.

“It is a great beginning, we really want to take this forward there is so much more to be done and so many exciting activities to be showcased. The stories of Meghalaya need to be untold,” Conrad Sangma added.