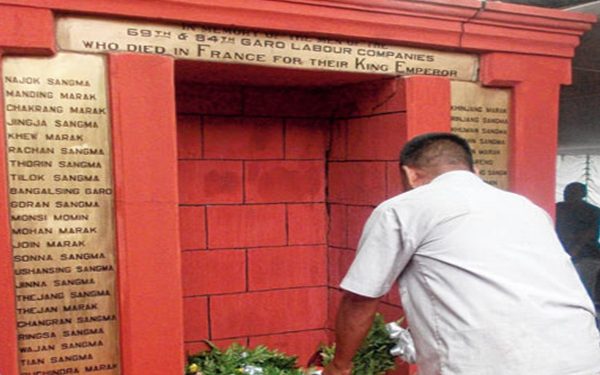 ‘Today, we celebrate the anniversary of the 69th Garo Labour Corps Day in honour of our Garo forefathers who offered their service in #WorldWarI in France. This day marks their safe arrival to our land & is a celebration of their bravery that won them international recognition.’

On this day, the State salutes and pay homage to the 500 Garo men, who were recruited by British 96 years ago in 1917 in the 69th Garo Labour Corps.

The selected men were sent to France to help the Allied forces during the War.

These recruits from the State made roads and carried goods during the war at different places in France like Puisieux, Bucquoy, La Chapellette, Brusle and others.

Tributes were paid at the cenotaph built in the memory of the Garo soldiers at Tura, the headquarters of West Garo Hill district.

Garo Labour Corps Day is celebrated on July 16 because on this day, the Garo men returned to India at Tura in Meghalaya from Mersailles in France.