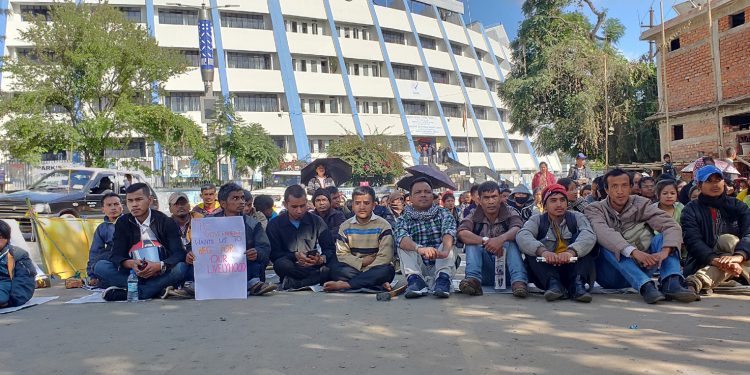 A view of the protest by Meghalaya’s persons with disabilities (PwDs) in Shillong on Tuesday. Image credit – Northeast Now

Persons with disabilities (PwDs) in Meghalaya threatened to knock the door of the Meghalaya High Court if the 4 per cent job reservation is not implemented immediately.

This was announced on the occasion of the International Day of Persons with Disabilities as the PwDs of the state assembled for a sit-in demonstration at the parking lot near the additional secretariat in Shillong on Tuesday.

The sit-in was organised by the Federation of Persons with Disabilities in protest against the state government for not implementing fully the 4 pc job reservation in various government departments, delay to enhance the employment allowance for PwDs who have completed matriculation.

The other demanded included denial of various schemes and benefits like PMAY scheme for making houses, and availing loan under the National Handicapped Finance and Development Corporation through the Meghalaya Cooperative Apex Bank to take up self employment ventures.

“We will assemble again in this same venue on December 19 to make the government hear our grievances,” Starwin Kharjana, publicity secretary of the federation, told reporters.

“If the government does not hear, we will discuss among us for contributions so that we can fight for our rights in the Meghalaya High Court,” Kharjana said.

Kharjana said a similar petition of the National Blind in Supreme Court has led to an order directing the central government to complete the backlog recruitment for PwDs.

“We are delighted and hoped that we will get justice,” he said.

The federation of persons with disabilities comprises six organisations.

Demanding from the government to fully implement the 4 pc job reservation as per the Right of Persons with Disabilities Act, Kharjana said, till date, the state government has not implemented the reservation.

“We met social welfare minister Kyrmen Shylla on September 23 this year, who had assured of doing something for the welfare of PwDs including the job reservation and welfare schemes,” said Kharjana.

“After one month when we met him again, the replies did not satisfy us. The statement of the minister dispirited us when he said that if we are not satisfied with his replies, we should go and ask from the directorate of social welfare.”

“We want to know from the minister, whether the directorate is higher than the secretariat? We want to send this message to the minister that he should carefully and thoroughly look into our demands,” Kharjana said.

The PwDs demanded that job recruitment in various departments either by the district selection committee or the Meghalaya Public Service Commission should ensure the 4 pc job reservation.

“The state government is using its own formula just to deny us this 4 pc job reservation,” he said.