Refrain from act of violence and work together with the government: Meghalaya home minister Rymbui 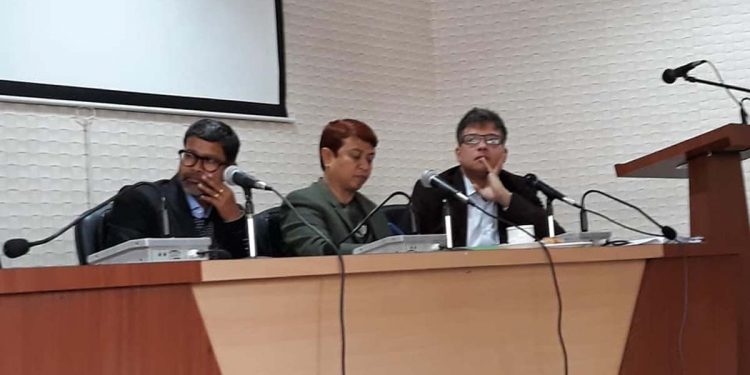 Amidst incidents of violence reported in Shillong and Shella, Meghalaya home (police) minister Lahkmen Rymbui on Tuesday had a meeting with representatives of various religious bodies and social organizations.

Rymbui, who chaired the meeting, had discussions on the ways and means to bring back normalcy and restore peace in Shillong and Sohra areas in East Khasi Hills, which has been hit by violent incidents in the past few days.

Shillong city has witnessed violent incidents in the past few days after members of the Khasi Students’ Union (KSU) were attacked by a group at Ichamati village on February 28 which led to the death of its member, Lurshai Hynñiewta.

Stabbing incidents were reported in the state capital of Shillong which led to the death of one small trader from Assam, and injury to several other people.

Speaking to reporters after the meeting, Rymbui said the meeting with the representatives of various religious bodies and social organisations discussed how to restore normalcy and maintain peace in the state.

He also thanked the representatives for attending the meeting and for giving various suggestions on how to restore normalcy and peace in the state.

Rymbui said the meeting acknowledged the government’s seriousness on the issue of ILP as demanded by the people and stressed that the government should seriously pursue the resolution on ILP passed by the State Assembly with the union government and implement the system in the state.

“It was also suggested that other existing laws that can protect the state should be strengthened,” the Meghalaya home minister said.

Another discussion was on the on-going examinations that should not be disturbed as it will affect the career of the future generations.

“In the meeting I told that the next three months are crucial for our students and young people of the state. The HSSLC examinations started on Monday, and the SSLC examinations will commence from Wednesday,” said Rymbui.

“The recruitment process of the state police will begin on March 17, which will be participated by thousands of youth who wanted to join the police force and this recruitment will continue till May.”

“Besides, the JEE entrance test will be also held in April and NEET exams will be conducted in May-June,” Rymbui explained.

Rymbui said the meeting also resolved that the government should convene such meeting frequently in order to know the feelings and get feedbacks from the public on various issues and problems.

He also said there should be timely response from the government to the grievances concerning the welfare of the people and there should not be any feeling of communal differences, and the law should not be partial in its applicability but equal for all.

“If there are people who did not possess valid documents, the government is looking into this issue as per the process of law,” the Meghalaya home minister said.

The home minister appealed to all citizens of the state to refrain from any act of violence, and work together with the government.

“I will work together with anybody because any concern expressed by any citizen is also a concern for all of us, and in a democracy, we should work to fulfil the aspirations through a proper way,” he said.