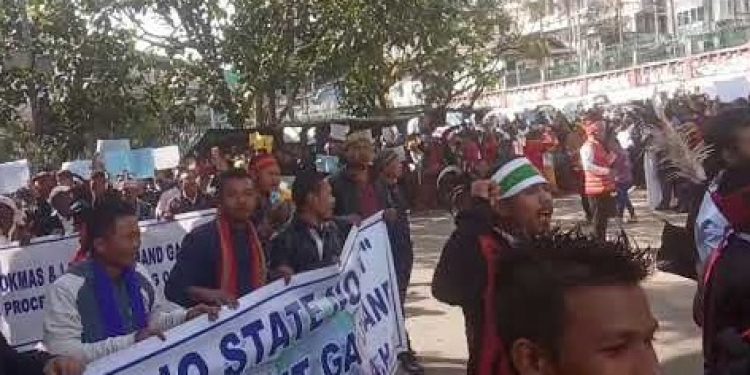 Several NGOs under the banner of the Garoland State Movement Committee (GSMC) took out a rally demanding for a separate state called Garoland for the Garo people in Shillong, the capital city of Meghalaya on Wednesday.

They also urged the Centre to set up a second State Reorganization Commission to look into their demand for formation of a separate state.

Nikman Ch Marak, GSMC chairman said that they would pursue their demand in a democratic way.

Led by the Garoland State Movement Committee (GSMC), members belonging to other groups like the Garo Students’ Union, Mother’s Union, Federation of A’chik Freedom, A’chik Holistic Awakening Movement, the people demonstrated their will to break away from the Khasi-Jaintia hills region and have a state of their own.

Marak said that though the Garos have been living cordially with the other tribes of Meghalaya, their region have remain underdeveloped for 46 years since the formation of Meghalaya as a state in 1972.

He also said that the Garos have their own culture, customs, language and a way of governance which is distinct from the other tribes of the State.

The GSMC is now voicing their demands over formation of a separate state for the Garos.

Marak said the Garo population living in the five districts of Garo hills is more than nine lakh while that in the entire state is around 12 lakh.

He also said that there are some Garos who are permanent residentas of Goalpara district of Assam and some of them have also been residing in the Mymensingh district of Bangladesh.

The Garos of Goalpara district have been demanding an autonomous council in Assam.

Marak said that at present the GSMC is trying to carve out the proposed Garoland from within the boundaries of Meghalaya and it has nothing to do with any neighbouring State.