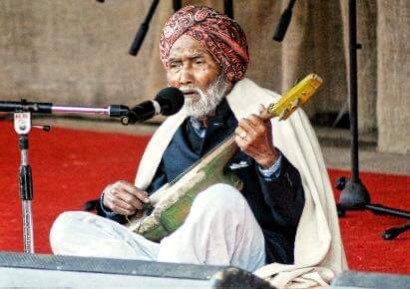 He passed away on Saturday leaving behind a legacy to cherish through generations.

He is survived by four children – two sons and two daughters, apart from another son who passed away in 1998.

He also leaves behind around 16 grandchildren.

He was an ardent footballer during his youth days, particularly when he studied at Ram Krishna Mission at Sohra or Cherapunjee.

During his early days he used to sing occasionally during the various local functions.

He couldn’t complete his schooling and initially became a bus driver, and later engaged in coal trade with late K M Diengdoh, a renowned local entrepreneur.

After he got married, he was occupied with transportation and trading on market days all over the Khasi Jaiñtia territories.

However, he always kept abreast with his passion for music.

When he settled at Mawngap, Kerios Wahlang was fascinated with theatre and some of his songs were featured in the drama performances.

It was during 1978-79 that he ventured into proper singing career through All India Radio, Shillong.

Since his school days, he had composed and sung his own songs, but the All India Radio had provided enormous opportunities for furtherance of his singing career and later performed in the Doordarshan television programmes throughout his life.

He was also invited to perform on many prestigious events in the country, even as he complied with few persuasions due to certain personal limitations.

Kerios Wahlang had composed hundreds of songs and few of them were featured on certain films by some reputed filmmakers; although around sixty lyrics were discovered from his hand written manuscript.

Almost all of his songs are based on nature and culture of the people, though few love songs and philosophical compositions were also found.

H Kerios Wahlang was one of the respected elders of Seng Khasi.

The nature is always surrounded around his aura, when till recent years he would roam around the Mawphlang sacred grove.

He also walked up on foot to the summit of Sohpetbneng peak during the annual pilgrimage.

For his spectacular contribution to the Khasi folk music and to the community, he was felicitated by the Raj Bhavan, Doordarshan, Seng Khasi Seng Kmie, National Institute of Technology and Riti Academy of Visual Arts.

His mortal remain will be cremated on Tuesday at the Seng Khasi Mawngap Crematorium.

Meghalaya chief minister Conrad Sangma took to Twitter to condole the demise of the music legend.

‘Deeply saddened by the demise of Bah Kerios Wahlang, the folk music legend from #Meghalaya. The ‘duitara’ wizard enchanted people around the world with his songs about our Sacred Grove. We have lost a true legend today. May his soul rest in peace.‘