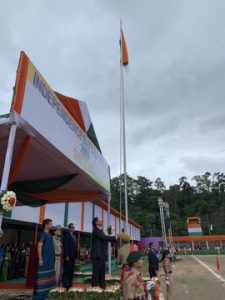 Addressing the people on the occasion of the 73rd Independence Day of India, Conrad paid homage to the valiant martyrs and the great freedom fighters of the nation.

He also offered his heartfelt tribute to the father of the nation, Mahatma Gandhi and all the freedom fighters, including the Meghalaya brave hearts U Tirot Sing, U Kiang Nangbah and Pa Togan Sangma.

Stressing on the need to boost economy, Sangma said that tourism and hospitality sectors are key to Meghalaya’s growth.

Hailing the recent verdict of the Supreme Court lifting the 2014 ban on coal mining, the chief minister said that it is a massive victory for the people of the State.

He added that it will have a positive impact on the economy of the State and will lead to revival of the coal mining areas.

He also offered his deepest condolences to the families of those persons who have lost their lives due in the recent floods that swept the State, especially the Garo Hills region.