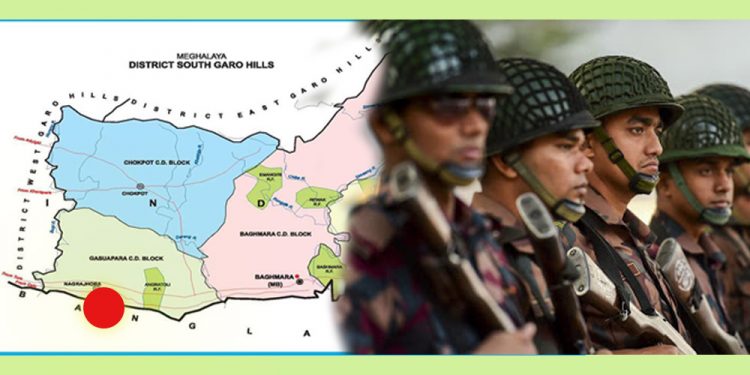 Thedion Momin, the Nokma (headman) of Ruthagre village was shot dead by BGB personnel on December 28 evening in a No Man’s land along the Bangladesh border south of Gasuapara in South Garo hills district of Meghalaya.

Villagers said Thedion was last seen at around 4.30 pm on December 28, plucking leaves from his vegetable garden, which is beyond the border fencing.

Thedion Momin’s vegetable garden extends up to the zero-point of the international border, and is also beyond the border fencing, the local villagers said.

And even the Indian border road in the area is beyond the border fencing.

“He (Thedion) had gone to his vegetable garden on his motorcycle, and did not return back home,” the villagers said, alleging that BGB personnel killed him in cold blood.

After killing ‘innocent’ Thedion Momin, the BGB issued a statement claiming that he was a smuggler, and was killed in a ‘gun-battle’.

Lt. Colonel Touhid Mahmud, commander of BGB’s Mymensingh Sector 39 Battalion has claimed that a ‘group of smugglers’ tried to enter the Haluaghat upazila border at night.

The BGB also claimed that the ‘group of smugglers’ had attacked them with sharp weapons, and they had to open fire in self-defence.

Thedion Momin died on the spot, the BGB claimed, adding that the body was later sent to Mymensingh Medical College Hospital for post mortem examination.

But, another version of BGB on the incident was totally contradictory.

Faruque also claimed one BGB jawan was also injured during the exchange of fire.

People in area came to know about the incident of cold-blooded murder of the Garo Nokma on December 30, and immediately informed the local police.

P. Pandey, superintendent of police of South Garo hills district told Northeast Now that they are investigating into the incident of killing of Thedion Momin by BGB personnel.

“He (Thedion) has no criminal records, and was never found to be involved in smuggling,” Pandey said, adding that he had gone missing since December 28 evening.