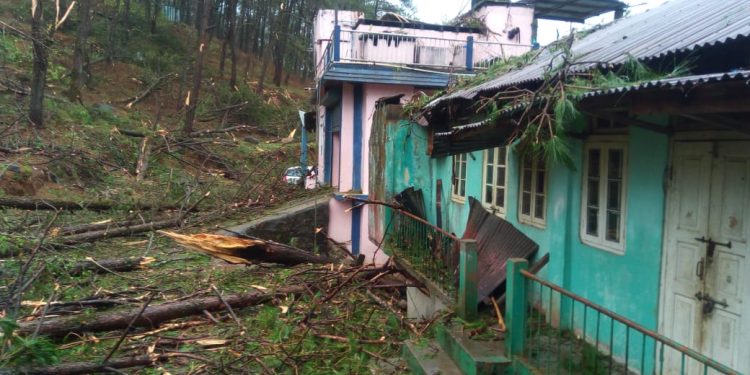 As many as 700 villages and 10,554 households besides 100 numbers of school buildings and few community halls have been affected by cyclonic storm and heavy rain in the past one week.

In view of the damages, Meghalaya revenue and disaster management minister Kyrmen Shylla on Thursday convened a high-level meeting with officials of the state government and took stock of the situation of through video conferencing with the concerned deputy commissioner of each district.

Cyclonic storm besides heavy rains have hit almost all parts of the state from April 14 to April 17.

Chief secretary and commissioner of Garo, Khasi and Jaiñtia Hills divisions and other officials attended the high-level meeting chaired by the Minister.

An official communique issued by the government on Thursday said, as per initial reports received from all the districts, the total number of affected villages is 700 and 10,554 households.

About 100 school buildings and few community halls have also been damaged.

Gratuitous relief in kind and tarpaulins were distributed to the affected families whose houses have been damaged fully.

The power supply in some parts of the districts like West Garo Hills, South West Khasi Hills and Ri-Bhoi district has been disrupted which has been restored partially. The department (MePDCL) is putting in all efforts to restore the same.

The minister asked all the deputy commissioners to be on alert and gear up all field level officers to respond effectively and to put in maximum effort to cover all the affected families especially in the far flung areas.

The chief secretary also asked all the deputy commissioners to submit detailed assessment reports at the earliest and instructed them to have contingency plans to meet exigencies and mitigate the grievances of the affected people.

It was informed that so far, three persons were reportedly injured under West Garo Hills district and medical facilities were provided to them.

“Almost all the districts have been affected but major damages were reported from Garo Hills Division and few districts from Khasi and Jaiñtia Hills which include West Khasi Hills, East Jaiñtia, West Jaiñtia Hills,” the communique stated.