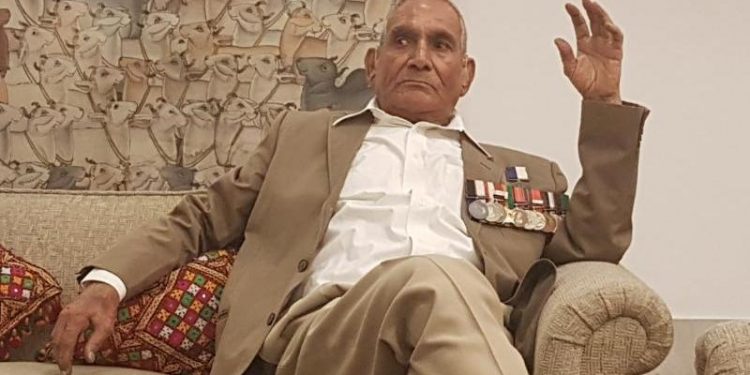 BS Tyagi exhibited exemplary courage while taking on the Pakistan army during the 1971 Indo-Pak War.

Retired Border Security Force (BSF) officer BS Tyagi, the lone survivor of the 1971 war at Killapara along the Indo-Bangla Border in West Garo Hills district of Meghalaya has passed away.

“A daring and gallant BSF officer and a great hero of the Indo-Pak war in Eastern theater, retired Commandant B S Tyagi collapsed while doing exercise on November 18 at about 6 am,” said a statement issued by the BSF in Shillong on Monday.

A homage was paid at Kilapara with full guards of honour by Darbara Singh 2IC, 75 Bn BSF to late Tyagi who had been the Coy Commander and instrumental leader of the 1971 war fought by the BSF at Kilapara, Dalu in West Garo Hills.

The BSF said that the saga of valour and sacrifice of the men guarding the borders are many, but one such chivalrous acts, which is still the talk of Dalu, a village situated along Indo-Bangla border in West Garo Hills district is of Tyagi and his men who stood firm against the enemy.

“He exhibited exemplary courage while taking on the Pakistan army during the 1971 Indo-Pak War with only a handful of men at his disposal when the information came in that the then East Pakistan Army was fast approaching,” BSF said.

It was on the morning of May 25, 1971, a Pakistan army battalion launched a full-scale attack on the Killapara border outpost.

The attack was repulsed twice by BSF Coy Commander Tyagi and his handful jawans manning the post though they were hugely outnumbered.

“The 9 BSF jawans fought valiantly till the last bullet before losing their lives. Their sacrifice, however, prevented Pakistani troops from advancing further and ultimately denied them control of the strategic Dalu-Tura road.

“The BSF soldiers fought till their last breath and since there was shortage of ammunition, they even used rifle butt against the Pakistani army,” it said.

Taking pride in the brave act of Tyagi, the director general of BSF as well as Border Guards of Bangladesh had felicitated him during the unveiling of war memorial at Dalu.

During the peak militancy in Punjab and Jammu Kashmir, Tyagi did excellent job against militancy of Punjab and known for his gallant action in general area of Mand in Punjab.

When militancy started in J&K, he was specially called to operate in the most militancy infested area of Baramula, Kupwara and Sopore.

During his deployment in Kashmir he sustained bullet injuries twice.

U.K Nayal, the DIG of BSF Meghalaya had worked under him when the unit was deployed in Kashmir as well as in Punjab.

Under Tyagi, he was also awarded with President Police Medal for Gallantry for his gallant actions against militants.