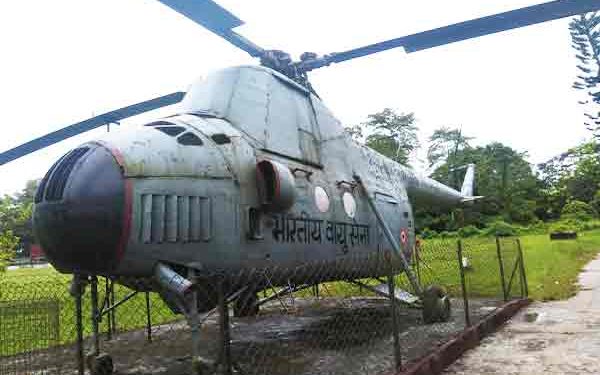 Most visitors to the Kendriya Vidyalaya at the Air Force Station in Upper Assam’s Jorhat often fail to notice the MI 4 helicopter, a historic war-bird on display in the campus.

Though most of the visitors don’t take interest in the MI 4 helicopter on display in the school, but, veterans of the 1971 Indo-Pak war always look at it with a lot of reverence and pride.

The war-bird on display in the school campus in Jorhat on December 16, 1971, had actually flown Lieutenant General Jagjit Singh Aurora, the then General Officer Commanding Chief (GOC-in-C) of the Eastern Command from Jessore (now in Western Bangladesh) to Dhaka.

The flight of 84 nautical miles from Jessore to Dhaka in the MI 4 helicopter led to dramatic end of the third Indo-Pak war in 1971.

Immediately after landing from the helicopter at Dhaka, Lieutenant General Jagjit Singh Aurora drove straight to the Ramna race-course for the historic surrender ceremony.

The Instrument of Surrender was signed at 4.31 pm (Indian Standard Time) on December 16, 1971 between Lieutenant General Jagjit Singh Aurora and Lieutenant-General A.A.K. Niazi, the Commander of the Pakistan Eastern Command.

The signing of the historic instrument of surrender confirmed the independence of East Pakistan as Bangladesh.

The crowd on the race course had started shouting anti-Pakistan slogans, and were trying to lynch Lt-Gen Niazi. Quickly, the Pakistani officials were whisked away in a vehicle.

During the Indo-Pak war of 1971, MI 4 helicopters were used in both operations and transport jobs.

Though the MI 4 superficially resembled the H-19 Chickasaw, it was a much larger helicopter, could lift more weight, and could accommodate 14 to 16 passengers.

Like every student of the Kendriya Vidyalaya in Jorhat’s Air Force Station, people of Assam should also take pride in the helicopter as a “trophy victory” over Pakistan.

Unfortunately, the historic war-bird for years remained unnoticed by people of Assam.