Marak has lodged complaints with the deputy commissioner (DC) and district transport officer (DTO) of South West Garo Hills demanding steps to prevent the boulder-laden trucks from plying in the district.

The Member of District Council (MDC) said the overloaded trucks carry boulders and ply from Ampati to Mahendraganj for exporting the same to Bangladesh from various quarries located in West Garo Hills.

He blamed the overloaded trucks for the dilapidated condition of the roads in South West Garo Hills district. 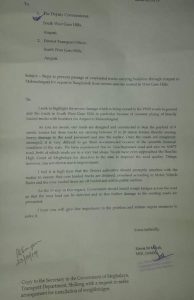 In his letter to the DC and DTO, Marak said “the severe damage which is being caused to the PWD roads in general and the roads in South West Garo Fills in particular because of constant plying of heavily loaded trucks with boulders via Ampati to Mahendraganj.”

He said the roads are designed and constructed to bear the load of “9 metric tonnes but these trucks are carrying between 15 to 20 metric tonnes thereby causing heavy damage to the road pavement and also the surface”.

Once the roads are completely damaged, it is very difficult to get them re-constructed because of the “unstable financial condition of the state”, the MDC said.

“We have experienced this on Tura-Bangmara road and also on AMPT road, both of which roads are in a very bad shape. People have ever approached the Hon’ble High Court of Meghalaya for direction to the state to improve the road quality,” he stated. 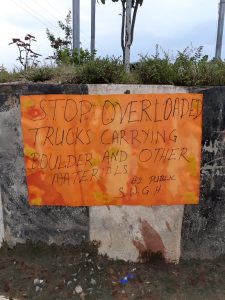 Marak further stated that “it is high time that the district authorities should promptly interfere” into the matter to ensure that overloaded trucks are detained, penalised according to Motor Vehicle Rules.

He also demanded that the “overloaded items are offloaded and sold in public auction”.

Marak also demanded setting up of “weigh bridges across the road so that the overload can be detected and so that further damage to the existing roads are prevented”.