“He had crossed over to India from Bangladesh, and we could arrest him when he was trying to return back,” the superintendent of police, said.

Nikrak M Sangma was in the disguise of a Garo villager, and was arrested close to the international border. 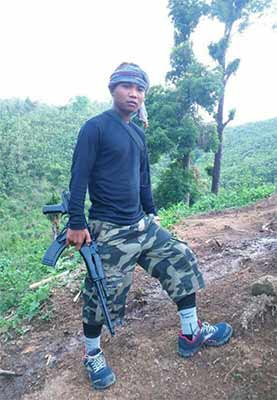 During the last few months, Nikrak M Sangma alias Kaltush, has been working to reorganize the GNLA in close coordination with ULFA militants and a section of criminals in Bangladesh.

Nikrak M Sangma had joined the GNLA in 2011, and belonged to the third batch of recruits, and had crossed over to Bangladesh in 2015.

Police officials said Nikrak M Sangma has been extending logistic support to the GNLA cadres, including supply of arms, ammunition and uniform from Bangladesh.

While GNLA suffered a major setback after the killing of commander in chief Sohan D. Shira in February 2018, Nikrak M Sangma had continued to stay in Bangladesh.

During his stay in Bangladesh during the last one year, Nikrak M Sangma was involved in anti-national activities by supporting other militant outfits, including the ULFA.

Nikrak M Sangma was also involved in extortion and kidnapping of Indian nationals for ransom.

The GNLA, which was formed in 2009, is fighting for a sovereign Garoland in the Western areas of Meghalaya.

While Champion R. Sangma is now out of the Shillong Jails, it is being suspected that Nikrak M Sangma was also in touch with him.

Police and intelligence officials have started interrogating Nikrak M Sangma in an undisclosed location in the Garo hills.