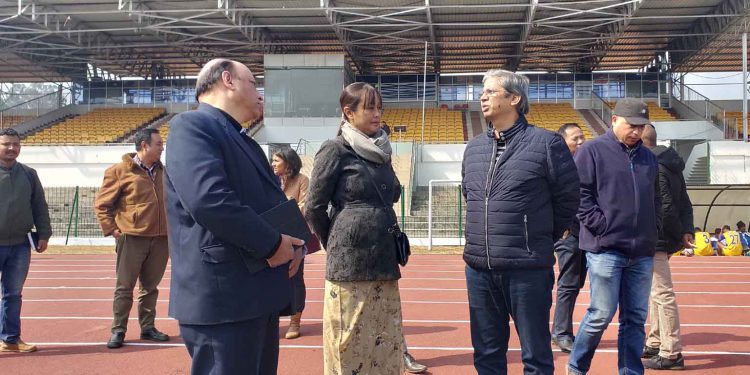 Sacheti (second from left) along with Meghalaya sports department officials at JN stadium in Shillong on Thursday. Image: Northeast Now

A coordination and games technical conduct committee of the Indian Olympic Association on Thursday inspected the sites meant for building sports infrastructure for the 2022 National Games in Meghalaya.

The committee, led by chairman Raj Kumar Sacheti, visited the sites proposed for building a stadium, games village, and other facilities at Umsawli in the outskirts of Shillong.

Sacheti found that work has not started for building the sports infrastructure, though Meghalaya got only two years to prepare for the prestigious sporting event in 2022.

Sacheti’s car could not even reach the site as there is no road, which compelled him to walk for about 1 km.

Sacheti asked a number of questions including plans for hosting the games, and venues for conducting various disciplines.

He also enquired about the venues for hosting hockey and other disciplines, to which, officials informed that hockey will be held at Tura in West Garo Hills district.

After inspecting the sites at Umsawli, Sacheti visited the JN Stadium and the artificial football turf where he queried about the number of matches played in the turf so far.

During the conversation, an official of the sports department informed Sacheti that 10,000 football matches have been played in the artificial turf.

Sacheti refused to speak to media persons after the inspection, saying he would first meet state officials at the state secretariat in the evening.

Sacheti was special adviser for the 12th South Asian Games (which Shillong co-hosted along with Guwahati in 2016) and India’s deputy chef de mission for the 2018 Asian Games.

The Indian Olympic Association has formed a coordination and games technical conduct committee for the National Games, which Meghalaya is scheduled to hold in 2022.

One of the duties of this committee will be to officially notify what sports disciplines will be featured in the games.