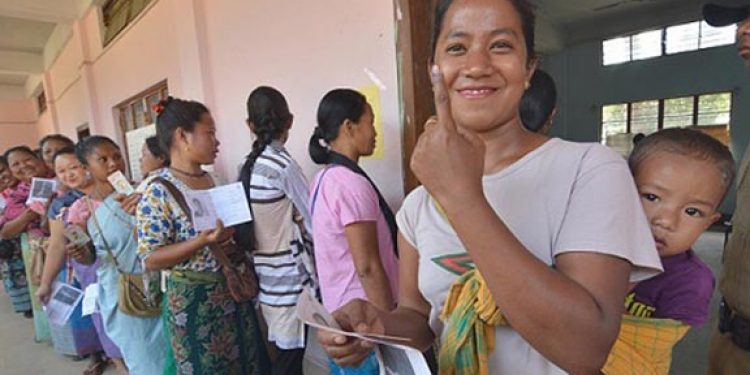 View of a polling station in Meghalaya. A woman shows her finger inked after casting her vote during the first phase of Lok Sabha polls on Thursday. Image - UB Photos

Selsella Assembly seat went to by-poll together with the Lok Sabha poll to Tura parliamentary constituency on April 11.

However, the re-poll was necessitated due to crisscrossing of EVMs during the polling held on April 11.

The problem occurred due to a mix-up of EVMs as there was wrong connection of voting machines by a presiding officer.

The by-poll to Selsella Assembly constituency was held to fill up the seat which has fallen vacant after the death Clement Marak (who won the state Assembly poll in 2018) on October 8 last year.

Four candidates are in the fray in the by-poll to Selsella Assembly constituency.

The candidates include Ferlin C.A. Sangma of the ruling NPP, June Eliana R. Marak of the Congress and widow of late Clement Marak, Sayeedullah Nongrum of the United Democratic Party (UDP) and Adorsho Sangma of the BJP.

For the Lok Sabha poll to Tura seat, three candidates are in the fray – Agatha K Sangma of the NPP, former chief minister Mukul Sangma of the opposition Congress and Rikman G Momin of the BJP.