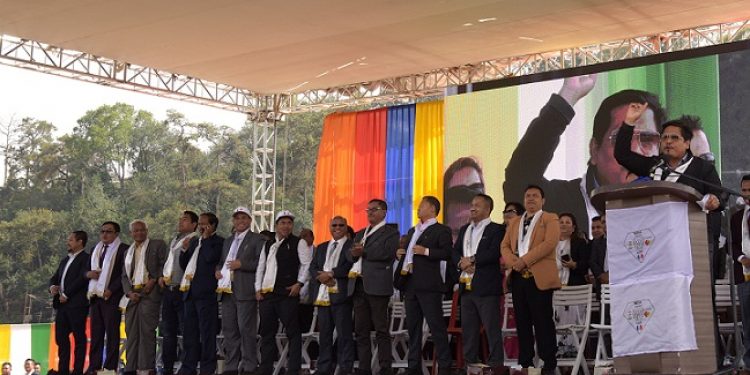 Conrad came from Tura by helicopter to campaign for Mawthoh, the UDP candidate, being supported by MDA partners from Shillong Lok Sabha seat, which goes to polls on April 11.

Addressing a few thousand people at Polo Ground here to drum up support for Mawthoh, Conrad talked about unity of political parties and leaders that formed the MDA government, and hoped that like leaders, voters at the grassroots too are united in ensuring the victory of Mawthoh.

The chief minister also called for unity in fighting for the rights of people of the state and North East in Delhi.

Stating the MDA government has to face full of challenges in the last one year, Conrad said, “We stood as team and support each other in the government. We are all equal in this MDA government.”

Taking a jibe at former chief minister, Mukul Sangma and the previous Congress government, Conrad said the previous government was the “bulldozer (JCB govt)” where nobody could say anything.

He, however, termed the MDA government a “dumper government” that gives everything and treated everybody equally.

“There was a discussion in the government and the chief minister did not take decision alone and respects the ministers, and MLAs. We do not discriminate anybody on basis of political party. We are a government for all and work for all citizens irrespective of political affiliations,” Conrad Sangma claimed, while urging the people to forget differences and work together to ensure the victory of Mawthoh in this election.

Attacking national parties including the Congress on the Citizenship Amendment Bill, the NPP national president said that there were times that national parties had received support from the region, but they did not respect the people’s sentiments.

“National parties like the Congress talked about the CAB. Was it not the Congress MP from Assam who also supported the Bill and wrote a letter congratulating the government for bringing the CAB?” he asked.

Referring to the Look East Policy which has been renamed as “Act East Policy” the Meghalaya chief minister regretted that nobody has looked or acted till today.

“If we have to move forward, it is we who should look and act. Just a statement on Look or Act East Policy it will not make any difference,” he said.

Urging all 25 MPs from the Northeast to come together, Conrad Sangma said that when there is unity, Delhi is bound to listen to various issues concerning the state and the Northeast.

He also said that the coming together of MDA partners in supporting the UDP candidate would send a strong message about the strength and unity of the people of the state, adding that his would ensure that the future of the people is protected.

Striking the unity chords, Mawthoh also spoke at length about initiatives of the MDA government, and questioned, what has the Congress done in the past many years despite getting the opportunity to send its representative to Parliament.

Mawthoh also took the name of former Lok Sabha MP from Shillong, late GG Swell, who according to Mawthoh, he had been a strong voice of the people in Parliament even though he represented from the regional party those years.

Mawthoh urged the people to support him in this election and if elected, he would be the voice of people in Delhi.