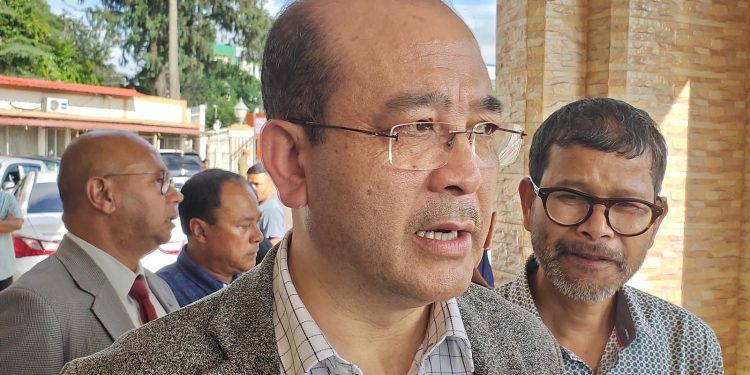 One ministerial post has to be filled up, following the resignation of Metbah Lyngdoh as minister on Tuesday, as he is the candidate of the MDA government for the election to the post of Speaker.

After taking over as the new UDP chief, Lyngdoh said the vacant post in the Cabinet should be filled by one of the MLAs of the UDP after his resignation as minister.

Earlier, the UDP claimed the Speaker’s post on the ground that the post was held by its leader, late Dr Donkupar Roy.

The UDP now claims the vacant ministerial post on the ground that the vacancy was created after the resignation of Lyngdoh as minister.

Lyngdoh, who won for the third consecutive time since 2008 from Mairang Assembly constituency, is the third president of the UDP.

He is the successor of late Donkupar Roy to the post of president.

The names of senior-most party leader and former deputy chief minister, Bindo M Lanong and former minister Paul Lyngdoh also figured as the contenders for the post during the discussion among members of the nomination committee.

Lanong was chosen as the chief adviser while Paul Lyngdoh continued as working president and Jemino Mawthoh as general secretary.

Lyngdoh was first chosen by 34 members of the UDP’s nomination committee.

Lyngdoh was also declared elected at the general council of the party.

He thanked all leaders and members of the party for choosing me as well as the general council for endorsing my name to take this post.

Lyngdoh said the first thing he would do as the president is to take all senior party leaders and stakeholders into confident to set agendas for the party which should be in the interest of the people of the state.

Lyngdoh is also the chairman of the Regional Democratic Alliance, a combine fore of the UDP and Hill State People’s Democratic Party (HSPDP).

On UDP members jumping to the BJP in the Jaiñtia Hills Autonomous District Council, the new UDP chief said they had taken a decision, which nobody could stop.

“Even legislators also may take such a decision, and sometimes they resigned and contested from another party.

“The tenth schedule of the constitution is not applicable in district councils in the state, and the members are free to move anywhere.

“But people from the constituencies they represent are the best one to say whether the members have done the right or wrong thing,” Lyngdoh added.