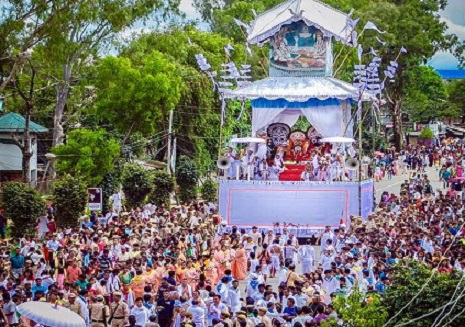 The nine day-long celebration of Kang (Rath Yatra) festival began with pomp and gaiety in Manipur on Saturday. The main events of the festival include the pulling of Kang, the traditional chariot and offering of flowers and fruits to Shree Shree Jagannath, Balabhadra and Subhadra.

The pulling of Kang was held at Shree Shree Govindajee temple complex here. A large number of devotees turned up in their traditional attires at the Palace Gate and temple to take part in the festival despite a downpour.

The ISKCON temple here also celebrated the festival by pulling a mini Kang along the Airport Road.

Generally the celebration of Kang festival in the state begins on the second day of Engen month of Manipuri lunar calendar and ends on the 10th day of the same month.

The state also celebrated Kang Chingba festival by holding religious rituals in the evening. The festival, which will conclude on July 22, also witnesses daily community feasts during the day and night at the local mandaps following traditional events.

Meanwhile Chief Minister N Biren Singh and others have greeted the people on the occasion of the festival. Inspector General Assam Rifles (South) Major General Virendra Singh extended warm wish and sincere goodwill to the people of Manipur on the auspicious occasion of Kang festival and prayed the festival heralds an era of peace, progress and prosperity in the region and enhances the spirit of unity, cohesiveness and brotherhood amongst the friendly people of all the communities of Manipur.