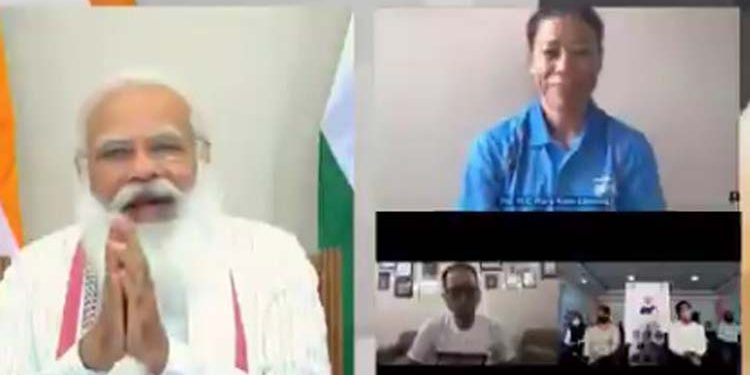 A view of the virtual conference between Narendra Modi and athletes qualified for Tokyo Olympics.

Mary Kom, who qualified for the 2021 Tokyo Olympics, told Prime Minister Narendra Modi during a virtual interaction that Muhammad Ali is her “hero”, who inspired her to take up boxing.

“Sir, Muhammad Ali is my hero. I have been inspired by him for taking up boxing,” boxing champion Mary Kom told Modi.

When Prime Minister Modi asked about her favourite punch, Mary Kom replied: “Because I am a southpaw, the hook punch is my favourite.”

“It’s a very effective move as I rarely miss my opponent with this punch. It is almost certain to hit them,” the boxer said.

The Prime Minister lauded Mary Kom for being a role model for many athletes.

He also sought to know how she was able to take care of her family and continue with her sport activities especially during the pandemic.

“Everybody at home is praying for me. My kids miss me a lot, I try to make them understand that ‘mama is going to represent the country, listen to what your papa says at home’,” the boxer from Manipur told PM Modi.

During the interaction with Indian athletes’ contingent bound for Tokyo Olympics, the Prime Minister motivated the athletes and thanked their families for their sacrifice.

The Prime Minister interacted with the athletes as an endeavour to motivate them ahead of their participation at the Games.

“Mary Kom ji, you have won almost every boxing tournament inthe world. You once said it’s your dream to win a gold medal in Olympics. This isn’t just your dream but also of the country,” Modi said.

He said the country expects that she will fulfil her dreams and the dreams of the country.

Mary Kom won a bronze medal at the London Olympic Games in 2012.

With this win, she became the first Indian boxer to bag a medal at Olympics.

She will aim for the final last time in Tokyo as this will be her last Olympics.