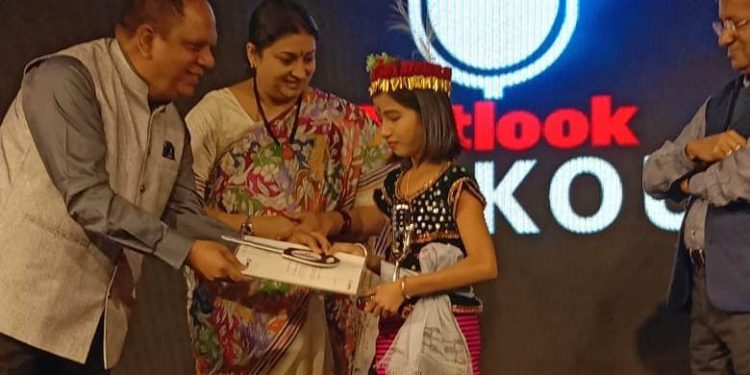 Union minister of women and child development Smriti Zubin Irani gives away the award to the Valentina Elangbam.

Manipur’s young Green Ambassador Valentina Elangbam has been presented with Outlook’s Speak Out Awards along with nine other woman achievers.

The award was presented to her during a colourful award ceremony in New Delhi on Saturday.

Union minister of women and child development Smriti Zubin Irani gave away the award to the young Manipuri achiever acknowledging the contribution made by brand ambassador.

Nine-year-old Valentina , a Class V student of Amutombi Divine Life English School broke down after the trees she planted four years ago near her house were cut down on August 3 for widening a road.

She was later named as the brand ambassador for the Chief Minister’s Green Manipur Mission.

Her appointment on August 7, 2019 came after the video of her crying inconsolably went viral on social media.

Premkumar, the proud father Valentina, who accompanied his daughter during the award ceremony said some of the audiences came out to take photograph of her daughter when she walked up to receive the memento and award with her traditional attire with Kajenglei, a headdress.

The Outlook Group instituted the ‘Speak Out 2019 Awards’ to honour upright individuals who showed personal courage, integrity and enthusiasm.

Men, women or children who stood up for what they believed were just, despite all the odds.