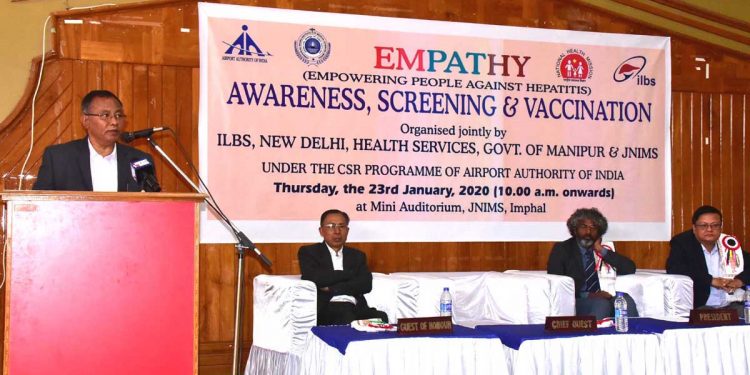 An expert team of the state health department has been sent for an investigation into the report of surfacing an ‘unknown disease’ in a village in Manipur’s Ukhrul district.

This was disclosed by the Manipur health and family welfare minister L Jayantakumar while attending the empathy campaign-cum-awareness programme on hepatitis with free vaccination held at the conference hall of JNIMS, a state-run medical institute here on Thursday.

Informing that the expert medical team will prepare a detailed report for taking further necessary action, Minister Jayentakumar said he has spoken to the union minister of health in this regard.

Two persons reportedly died due to an ‘unknown disease’ at Khamasom Phungdhar village under Ukhrul district, according to media reports.

On the other hand, Manipur minister Jayantakumar Singh informed that the government sets its objective to eliminate Hepatitis by 2030.

Jayantakumar Singh added that the National Viral Hepatitis Control Programme was launched in 2018 by the union ministry of health & family welfare with the objective to provide free screening, testing, diagnosis and treatment of all varieties of Hepatitis.

He also maintained that there are two centres in the state at present to avail the mentioned facilities, one at RIMS and another at JNIMS.

Free testing and diagnosis have already been started in these seven districts also, he added.

The occasion of empathy campaign-cum-awareness programme of viral Hepatitis with free vaccination was jointly organised by the Airport Authority of India, National Health Mission, Manipur, Authority of JNIMS and ILPS, India.