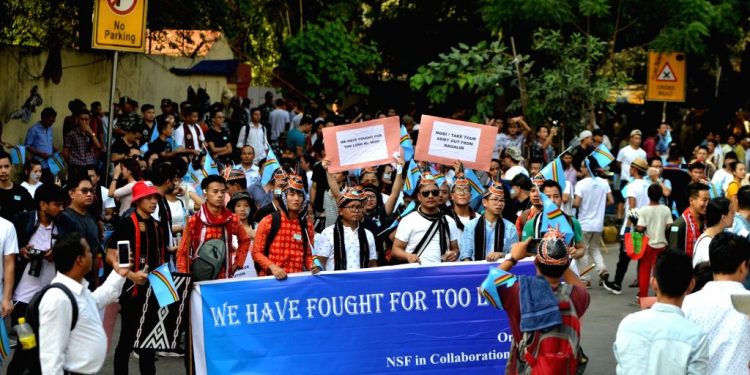 Hundreds of Naga people on Tuesday took out protest rallies in Manipur demanding an honourable solution to the NSCN (I-M) and Centre peace process.

Rallies were taken out under the banner of the United Naga Council (UNC) at the headquarters of Tamenglong, Ukhrul, Chandel and Senapati districts.

UNC is a conglomerate of several Naga civil bodies.

Holding banners reading “Peace rally for honourable and logical conclusion of India-Naga peace talk”, the protesters, some of whom also held small ‘NSCN (IM) flags’, began the march at around 11 am.

“Under your able leadership, the historic Indo-Naga Framework agreement was signed on 3rd August in New Delhi paving the way for a final settlement which we hope will be acceptable and honorable to the Naga people,” the memorandum read.

“While assuring our unwavering participation and support to the peace building initiatives in our land, we earnestly entreat you to conclude the Indo-Naga peace process keeping in mind the ‘Unique history and situation of the Nagas’ and based on the true spirit of Framework Agreement signed on 3rd August,” it added.

The Nagas are also convinced that a separate Naga national flag and constitution must be recognized by virtue of the unique history and shall form the basis of the final settlement, the memorandum said.

“We repose our faith in your visionary leadership and would prayerfully anticipated peace and progress in our land,” the memo added.