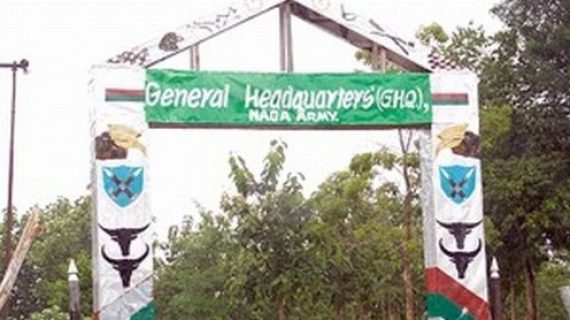 A gate at Camp Hebron of the NSCN (IM). Picture credit: epao.net

“Naga territories which have been kept apart arbitrarily and indiscriminately by the British in the first place and then further divided between Burma (now Myanmar) and India under Nehru without the knowledge and consent of the Naga people is totally unacceptable,” it said.

It further said both the parties agreed and recognized that integration of all the contiguous Naga areas is the legitimate right of the Naga people and it is mutually agreed that it will be pursued through earnest political democratic process.

“Now, after 21 years of negotiations, India and Naga people are prepared to finalize the political dialogue to its logical conclusion and resolve the oldest political problem in the entire South East Asia,” the release further maintained. Any attempt, at this crucial juncture, to undermine or disturb the peace process without being able to make head or tail of the negotiation shall no longer be tolerated, the NSCN (IM) warned.

It also termed the recent “irrational and irresponsible statements” on Naga territorial integration by Nagaland Chief Minister Neiphiu Rio as nothing but a direct challenge to the Naga national cause.

It also asserted that the Nagas will stand ground to the last come what may.

The release also reminded that this hard earned political achievement has come at the cost of untold sufferings and supreme sacrifices rendered by thousands of Naga sons and daughters. “No individual or organization is licensed to talk cheaply on the history of our people,” the NSCN (IM) added