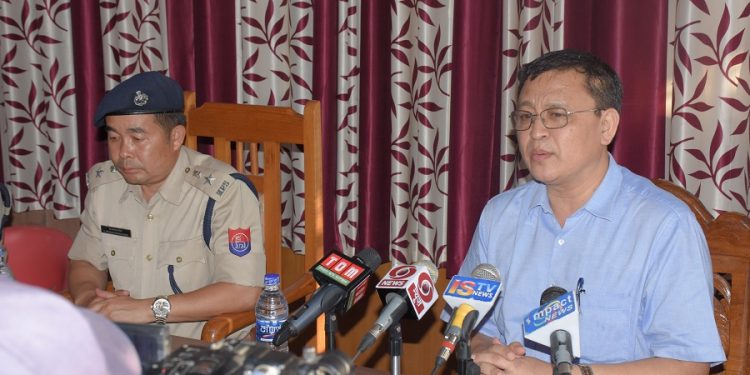 Necessary preparation have been made to ensure that the counting of votes polled in the Lok Sabha elections goes off without a hitch in Imphal West district of Manipur.

This was informed by District Election Officer Naorem Praveen Singh of Imphal West district who is the returning officer of the Inner Manipur Parliamentary Constituency.

DEO Praveen speaking to media on Tuesday said that a video conference with ECI officials in presence of CEO Manipur was held earlier in the day following smooth and successful dry run of the counting.

He said eight counting centres will be installed out of which seven are for EVMs and one for the normal postal ballot and Electronically Transmitted Postal Ballot System (ETPBS).

EVMs will be counted after the completion of the postal ballots and ETPBS. Election Observers will report on duty at 5 am on the day of the counting, he added.

To maintain transparency in the counting process, the passage from the strong room to the counting halls will be video recorded with installation of CCTV cameras.

The counting process will be displayed in TV monitors installed inside the DEO Imphal West office complex, he said.

DEO also said that internet connections will be provided to the media persons covering the counting. Thoubal and Bishnupur District Administration have all set for counting of votes polled across the Assembly Constituencies in their respective districts for the Inner and outer Manipur Lok Sabha seats, sources said.

The superintendent of police K Meghachandra of Imphal West district said that over 500 personnel each in three shifts of the Manipur Police are already deployed round the clock. Besides three companies of Central Paramilitary Forces, two teams of Anti Terrorists Squad with 15 persons each including women personnel and striking reserve are deployed for tackling law and order situations and to provide security till the day of the counting at the DEO Imphal West Office complex which is divided in three security zones/layers.

Apart from the strategic locations identified earlier, he informed that 18 additional locations have been identified where security forces will be deployed from tonight till the midnight of the May 23. He said that arms and ammunitions, sharp weapons, inflammable items like matches and intoxicants, mobile phones are strictly prohibited inside the office complex. He appealed to the supporters and agents of the winning candidate to refrain from using loudspeakers and provoking other supporters and agents.

The superintendent of police (Traffic) Kh Sarma of Imphal West district said that persons carrying ECI issued authority letter will be allowed to park their vehicles at the identified 10 cut off points and those unauthorized vehicles parked apart from the identified locations will be towed away by using crane. They will be penalized as per law, she added.