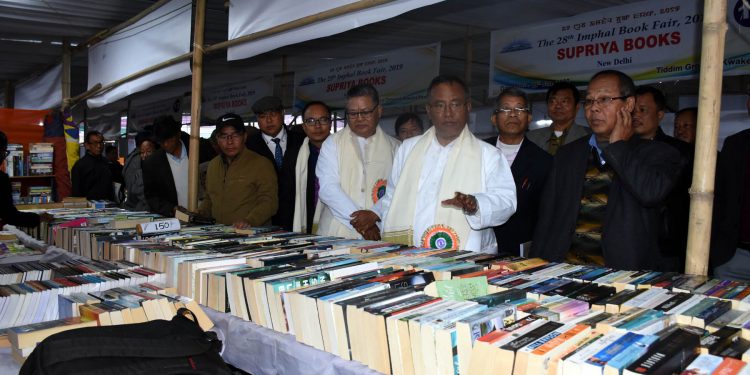 This edition of the book fair is witnessing active participation from 46 book firms including 15 from outside the State.

The ten-day book fair is being organized by State Central Library, Imphal and the Department of Art & Culture, Government of Manipur in collaboratin with the Raja Rammohan Roy Foundation, Kolkata.

Addresing the opening function, revenue minister Karam Shyam said Manipur still is lagging behind as far as the importance of the value of library by the people is concerned.

So, there is need to arouse the interests of the public in reading books and try to cultivate a reading mindset to gain knowledge for bringing development of the State, he opined.

Drawing attention of concerned minister on the enforcement of the Manipur Public Libraries Act, 1988 and its implementation, Minister Shyam expressed the need to take due concern to re-flourish the various entities under the Art & Culture Department by allocating adequate budget.

He also appealed the public to promote the book firms from outside the State taking part in the fair and try to inculcate a reading habit among the younger generation.

Highlighting on the hindrances related to the Manipur Public Libraries Act, 1988 in his presidential speech, minister Jayanta Kumar said that framing acts and rules is easy but actual implementation is not an easy task.

The main purpose of maintaining a library is to create a conducive atmosphere so that people have a keen desire to read books, he added.

He also called upon the people of Manipur for participation and raising their voices in order to preserve the identity of composite culture.

The Book Fair will continue till January 19 next.