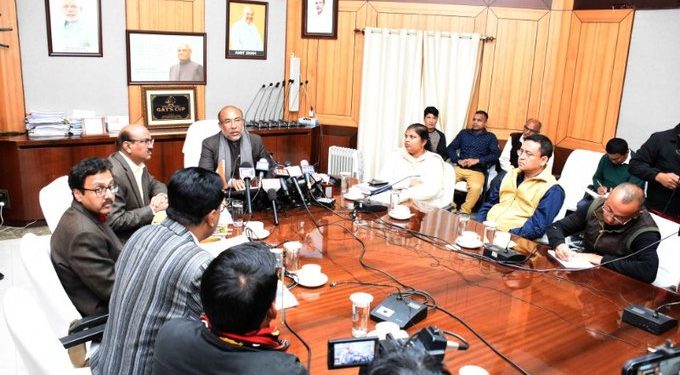 The chief minister said this has been done to maintain transparency and accountability in the implementation of the ILP.

One can log on to manipurilponline.com for more details.

With the launch of an ILP web portal, the system will improve the efficiency and maintenance of records and documentation with a proper database.

The portal will also provide a back-end for the home department where records of the applicants will be maintained, including the relevant details of the permits issued.

N Biren while interacting with media disclosed that the online service would be initially operational at the Bir Tikendrajit International Airport in Imphal from Friday with six computer systems to generate the pass.

In a few weeks’ time, the portal would also be expanded in all the entry points where the ILP is being issued since January 1 and generate the pass after feeding the data digitally, he said.

At present, there are seven ILP entry points at Imphal Airport, Mao in Senapati, Jiribam, Jessami in Ukhrul, Moreh in Tengnoupal, Behiang and Sinzawl in Churachandpur district.

For the time being, the online service would be available for the temporary permits.

And also to further simplify the process, applicants seeking for this permit can make necessary payment online after they get clearance permission from the authorities and pre-print their permits before they arrive in the state.

And those applicants who fall under the other three permits, namely regular permits, special permits and labour permits, would be able to submit the necessary details and documents online.

However, issue of such permits will be subject to the scrutiny of the documents submitted and approved by the competent authority.

From March 1 onwards, the portal will also provide an online interface where the intending visitors or travellers to Manipur can apply online for ILP.

Moreover, a mobile app will soon be made available to enable applications through mobile phones.

Since the ILP implemented on January 1, the State has so far issued 33,995 permits in a single month.

Of the seven entry points, Imphal Airport received the highest number of travellers in the State with 15,639 and out of which 5,600 were for temporary permits.

The Manipur Government has launched another website to help taxpayers in the State.

Tax payers can now online transactions through manipurtaxes.gov.in which was also launched on Thursday.