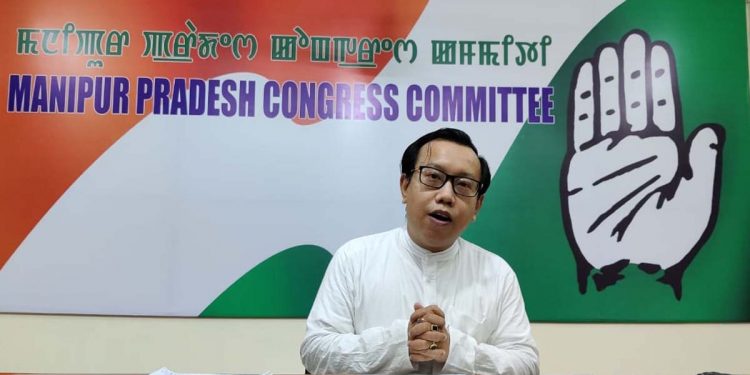 The Manipur Congress has reiterated that the previous Congress governments in Manipur maintained fiscal discipline and termed the BJP’s remarks on financial impropriety as just “baseless allegation”.

While addressing an online media conference at Imphal on Tuesday, Manipur Pradesh Congress Committee (MPCC) spokesperson N Bupenda Meitei said, “The Congress-led coalition governments in Manipur, which governed from 2002 to 2017, under the chief ministership of Okram Ibobi Singh, committed to maintain fiscal discipline and management for the better economy of Manipur.”

“It is justified from the fact that in August 2005, the Congress government in the state enacted the Manipur FRBM (Fiscal Responsibility and Budget Management) Act to ensure prudence in fiscal management and fiscal stability of the state,” the MPCC spokesperson said.

He said, “Unfortunately, BJP in the state has given statements in such a manner that makes a covertly deliberate attempt to confuse the people by blaming the Ibobi-led Congress governments as the cause of financial burden, with the amount of Rs. 8707 crore.”

The Manipur Congress spokesperson said: “If the BJP is concerned about the fiscal liabilities due to outstanding debt, then they must first use the correct figures, in public domain, by giving a reference from any government data. It is the nature of the BJP that it neither gives the correct figures nor quotes a reference.”

“The exact figure, which was wrongly quoted by the BJP, should have been Rs. 8807.82 crore,” Meitei clarified.

He alleged that the BJP portrays as if Rs. 8807.82 crores were created as burden against the BJP government in March of 2017.

And “to ease the financial burden it appears that the BJP has been justifying its relentless increase in petrol and diesel prices in Manipur without even having an iota of meetings on reducing a single rupee from state’s VAT in a litre of petrol or diesel during Covid pandemic,” Meitei said.

“What BJP attempts is even to suggest that the employment, to fill the long awaited cumulative vacant posts, done before 2017, created another financial burden on the present BJP government,” he said.

The BJP has gone further in stating that the Congress failed in creating and strengthening health infrastructure in the state and that could be exemplified from the comparison of differences of the numbers of ICU beds available during the previous Congress government and the present BJP government, he added.

He questioned, “Should Congress government blame the pre-2002 state government for the financial liabilities of Rs. 2198 crores?”

He also questioned, “If BJP blames the Congress government for Rs. 8807.82 crores, then should the next government in 2022 also blame the present BJP government for its financial liabilities in 2021-22?”

The financial liabilities of the BJP government in 2021-22, if the continuing increasing trend remains, will not be less than Rs. 13,000 crores, Meitei claimed.

“So, is BJP justifying that the BJP state government must be blamed for its own financial liabilities of, probably, around Rs. 13,000 crores (approx.) in 2021-22? Will BJP accept that it is their own fiscal mismanagement that would create a financial burden on the future state exchequer in 2022?”

“Therefore, the arguments raised by the BJP on financial liabilities are against the principle of continuum of government. The BJP must learn and appreciate the fiscal discipline of the previous Congress governments,” he added.