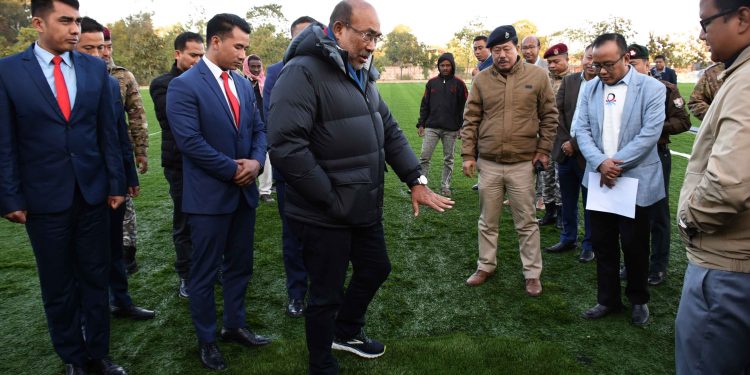 The astro-turf laying activities is underway at Langjing Achouba football ground in Manipur’s Imphal West District while the installation of flood lighting system is also on at Main Stadium and Hockey Stadium at Khuman Lampak sports complex, one of the advanced sports complex in the country, in Imphal East District.

Speaking to media persons on the sideline of the inspection visit, Chief Minister Biren said that laying of astro-turf and installation of flood lighting systems would be completed by mid-February this year.

Earlier during a similar inspection visit in September last year the state chief minister had said that the Government has also set the same target for the completion of upgrading Luwangpokpa Cricket Stadium and construction of gallery at RAU Ground as well.

This time he admitted that football training is being given to young players in around 30 grassroots football schools across the State. Almost all the districts except Pherzawl, Kakching and Tamenglong now have grassroots football schools, he said and added that works are in progress to begin session for the Centre of Excellence for Football at Khuman Lampak as well. He said that around 45 young players would be provided education and football training facilities at the Centre.

According to sources available here, the total approved cost of installation of flood lighting systems at Main Stadium and Hockey Stadium at Khuman Lampak is about Rs 35.31 crore while the approved costs of laying artificial turf at Langjing Achouba and upgradation of Luwangpokpa Cricket Stadium are about Rs 10.14 crore and Rs 11.14 crore respectively.

The government is also planning to train girl players as well in consultation with international players like Ngangom Bala Devi. Sports movement would not only help build up a healthy society but also inculcate discipline among children and youth.

On apprehension of discontinuation of some sports disciplines in SAI Takyelpat and SAI Khuman Lampak, the Chief Minister said that he had talked to Union Minister for Youth Affairs and Sports, Shri Kiren Rijiju, and there is nothing to worry.

The chief minister also inspected the condition of a building located at Khuman Lampak where players of Centre for Excellence of Football will stay.