Manipur chief minister appeals to learn to live with coronavirus 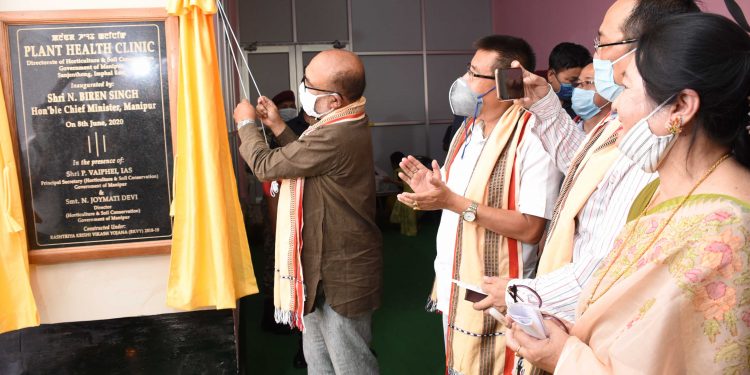 The chief minister was speaking at the inaugural function of  Plant Health Clinic at the Directorate of Horticulture and Soil Conservation in Imphal on Monday.

Plant health clinic was established for providing adequate diagnostic and advisory facilities to farmers on time and also to facilitate eco-friendly and scientific pest management strategies to increase productivity.

Speaking on the occasion, N Biren said the economic growth of the State lies in the growth of sectors like agriculture, horticulture and micro, small and medium enterprises.

Lauding the officials of the Horticulture department, he said it is indeed an encouraging initiative taken up by the department to set up such plant clinic which would provide plant health diagnostic services to farmers.

He advised the officials of the department to conduct awareness campaigns about such clinic among the farmers.

He mentioned that the priority of the government is to make Manipur a self sufficient and self reliant region.

The Government has taken up all the necessary steps in this regard, he added.

Biren Singh informed that most of the indigenous crops and fruits are disappearing due to the lack of scientific research and practices.

“We should try to avoid the usage of chemical fertilizers during cultivation of crops,” he added.

He hinted that many unknown diseases might have occurred due to the usage of toxic chemicals and fertilizers.

Strongly condemning the act of the inmates residing at Waikhom Mani Girls College quarantine centre, Thoubal for vandalizing college properties on Sunday, he asked the parents of the inmates of quarantine centers to advise their wards to maintain discipline, co-operation and adhere to the Standard Operating Procedure issued by the government.

He said in such short period of five days, more than 35,000 natives have been returned to the State.

He sought the cooperation and support of the people in the fight against dreaded disease.