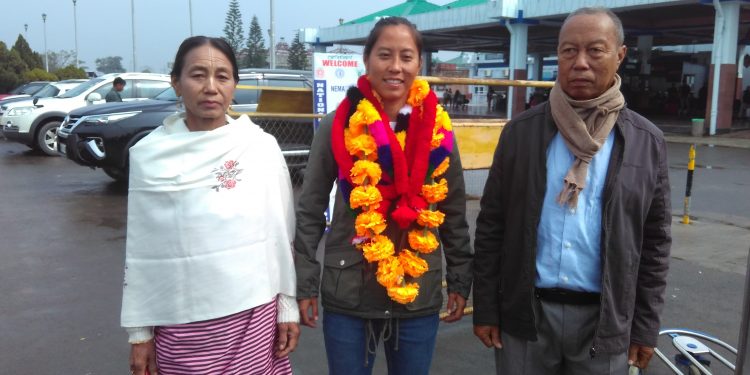 India’s first woman footballer Ngangom Bala Devi of Manipur who has signed a professional contract with a European club, said her primary focus is only on the current football opportunity.

“Right now my focus is on the current football opportunity,” Bala said while responding to a question when she returned to her Irengbam Mamang Makha Leikai home in Manipur’s Bishnupur district.

Twenty nine year old Bala who is the current top scorer for the Indian national team becomes the first Indian woman footballer to be signed by Rangers FC, one of the top football clubs in Scottish League for an 18 months contract which allows her to be available for two seasons.

Sharing some of her happiness moments in the past, Bala who joined national women football team when she was just 15 years old, said achieving the title of women footballer of the year in 2014-15 apart from getting the top scorer title during Maldives National Women’s League (2015) was one of her memorable moments.

Indian national team forward Bala who netted 52 goals from 58 appearances since 2010, also informed that she feel good and so happy for creating a historic feat in women football.

“So I will work hard and try to bring laurels for the country because such opportunity is my childhood dream,” says the youngest among siblings of four.

At the same time, the current top scorer for the Indian national team also expressed her gratitude to all her guides and coaches in her locality and the state for their continuous support to reach ongoing journey.

Two times All India Football Federation Women’s Player of the Year title winner (in 2015 and 2016) is one of the six new international signings by Rangers ahead of the new season.

Bala’s journey to Rangers FC started in November 2019 when she visited Ranger facility in Glasgow for six days and managed to impress the technical staff.