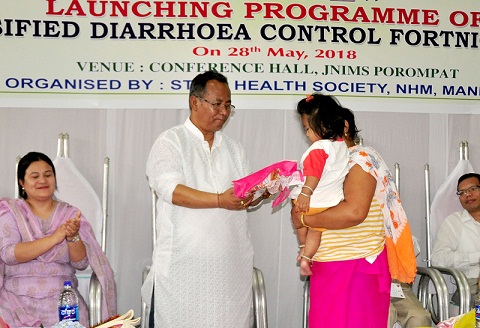 Speaking on the occasion, minister Jayantakumar said collective effort is quite necessary to control diarrhoea. He said mass awareness is also required for successful implementation of the intensified diarrhoea control fortnight.

The minister further said educated people can easily understand the pros and cons of the disease and its solution but it is very hard for those who are illiterate especially the people residing at remote places of the state. He said various departments should make a joint effort to spread awareness among the people at the remote places about the disease, its cause and cure.

The minister also said it is necessary for the people to know the traditional method of oral rehydration like the salt-sugar solution for immediate supplementation in absence of ORS and Zinc solution.

Demonstration for proper hand washing to be followed before any meal was also exhibited by the doctors as part of the campaign. Selected children were also given ORS and Zinc supplements by the chief guest and the dignitaries on the dais.

In her speech, Director NHM N Bandana Devi said the objective of organising the fortnight is to reduce the death rate resulting from diarrhea. Mothers need to take a major role in teaching their children on how to lead a hygienic life. This time the state authority is targeting to cover around 3 lakhs children. There are also reports launching the IDCF in other districts of the state.