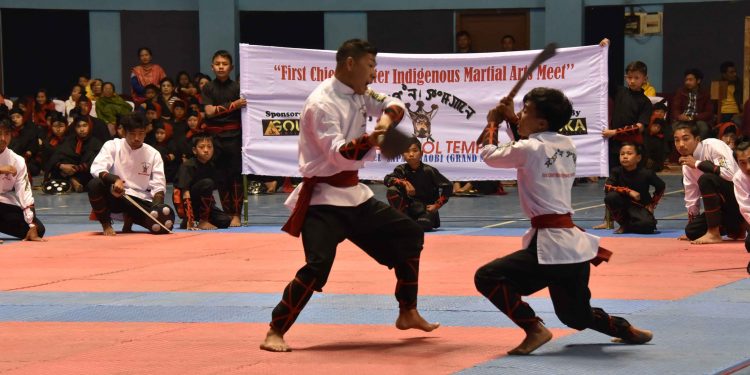 The five day meet which is is a brainchild of the chief minister, will continue till January 22.

Speaking on the occasion, chief minister Biren Singh said Thang-Ta played a vital role in protecting Manipur from invaders in its 2000 years of civilization.

However, it apparently had lost its essence in the past few decades, he opined.

As such, the State Government has been actively exploring means to revive the age-old art form, the chief minister said.

He further informed after a series of meetings and consultations, the Government decided to organize a martial arts championship as a calendar event every year.

He also said the Government’s intention is to encourage the youth and children to learn martial arts so that they stay away from drugs and intoxicants.

He expressed his desire to set up martial arts learning centres in every village of the State so that different martial art forms including those of hill areas can be popularized in every nook and corner of Manipur.

He also urged the organizers to put in more effort to two-fold increase this figure in the next year’s championship.

Stating that the present Government takes the task of popularizing martial arts is of prime importance, the chief minister also urged the public to join hands in this regard.

He further opined that there is need to forget personal ambitions to achieve a collective goal.

In his speech, sports minister Letpao Haokip said the present generation should leave no stone unturned in preserving the old indigenous games, which are the important components of Manipur’s culture.

He also added that the Government would consider to include different indigenous games of hill areas as well in the next year’s championship.

MLAs, government officials and Thang-Ta Gurus were also present at the function.

The five-day competition which will continue till January 22 wherein cash prizes and medals consisting of Rs 15,000, Rs. 10,000 and Rs 5000 would be given to gold, silver and bronze medal winners respectively.