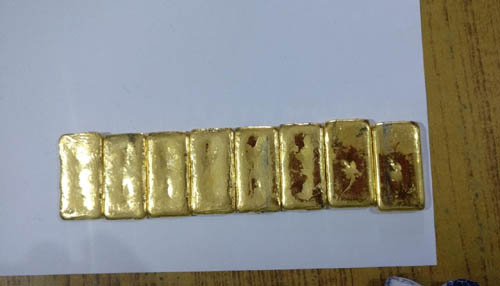 The seizure of the gold biscuits of ‘foreign origin’ was made by Anti-smuggling unit of the Customs Division Imphal, led by its Superintendent based on specific information from two persons from Waheng Leikai Jiribam Taxi parking in Imphal West around 7.30 am on Saturday, sources said.

The arrested individuals have been identified as Amit Kumar Verma (40) son of Ramesh Kumar, Bhagalpur, Bihar and Rajat Soni (26) son of Mishri Lal Soni of Hooghly.

Assistant Commissioner RK Darendrajit Singh of Customs (Preventive) Division Imphal in a press release said that the detected gold biscuits were recovered from their body cavity (rectum)-four gold biscuits each.

“The gold biscuits were to be smuggled from Imphal to Silchar and further to Kolkata,” the officer said. “Seizure of the said gold biscuits was effected on August 4 and valued Rs 39,53,456 (Thirty nine lakh fifty three thousand four hundred fifty six).”

So far gold weighing around 200 kilograms worth more than Rs 100 crores have been seized by the customs officials stationed in Manipur.