Thounaojam Brinda was conferred the Chief Minister’s Police Medal for Gallantry on August 13, 2018, which is being celebrated as Patriot’s Day.

The court ordered immediate release of 51-year-old Zou, who is currently lodged at Sajiwa Central Jail. 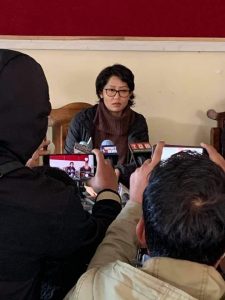 “The investigation and prosecution have been deemed unsatisfactory by the Hon’ble ND&PS Court. Hence, I do not consider myself deserving of the honour bestowed upon me… I, therefore, return the same (the gallantry award) to the State Home Department so it may be given to a more deserving and loyal police officer,” Th Brinda said in her letter to Chief Minister N Biren Singh.

On June 18, 2018, Th Brinda, who was then posted as an ASP with the Narcotic and Affairs of Border (NAB), led a raid at the official residence of Chandel ADC chairman Lhukhosei Zou in Imphal West and recovered contraband worth crores of rupees.

28 kilograms of amphetamine tablets (WY or Yaba tablets as commonly known) worth Rs 27 crores were seized during the raid from the BJP leader’s official residence. 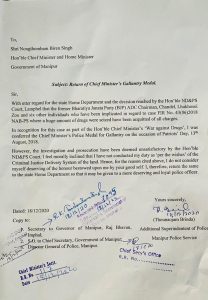 Moreover, cash worth Rs 57,18,000 were also recovered during the raid.

One 0.32 prohibited bore (NPB) pistol along with 21 live rounds and a single-barrel rifle were also recovered.