Cease work protest, which is scheduled to end at midnight on Thursday, has been extended till 6 pm of November 1 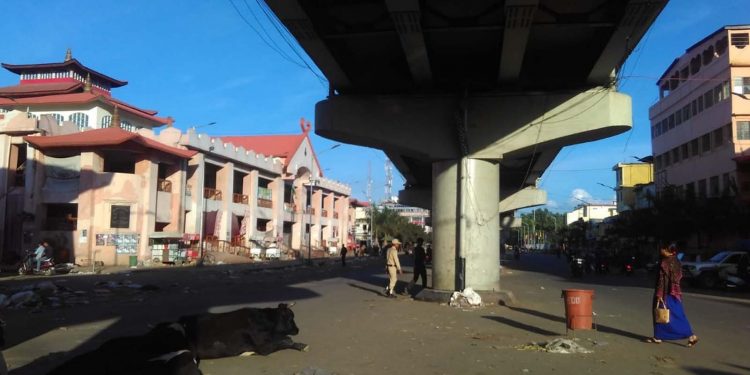 Normal life in Manipur was affected on Thursday due to 20-hour cease work protest launched by the Coordinating Committee on Manipur Integrity (Cocomi).

Cocomi is a joint body of major civil society organizations in Manipur.

The cease work protest was called to highlight the need to safeguard the state’s interests and territory amid the reports of finalisation of the Naga peace talks with the Centre.

Meanwhile, the cease work protest, which is scheduled to end at midnight on Thursday, has been extended till 6 pm of November 1, said Cocomi sources.

The peace talks between the Centre and NSCN (IM) and latter’s demand for integration of Naga inhabited areas has been a cause of concern among the people of Manipur.

The people of the state, particularly from the greater Imphal area, staged a sit-in demonstration demanding that the state’s interests be safeguarded.

The roads in Imphal areas wore a deserted look from dawn-to-dusk after transport services were suspended for the day.

Most of the government and private offices, educational institutions, markets, shops and business establishments, remained closed for the day.

But the cease work protest did not affect the normal life in some district headquarters.

Meanwhile, a 20-member delegation of all political parties in Manipur, led by chief minister N. Biren Singh raised their concern over the Naga peace talks before the Central leaders by submitting memorandums.

Amid media reports of an end to the decades-old Indo-Naga political issue, the union home ministry (MHA) on Thursday evening said all stakeholders will be consulted before coming to any conclusion.

“It has come to notice of the Government that lots of rumours and misinformation is being spread in media including social media that final Naga settlement has been arrived at and will be announced soon. This is creating anxiety and concern in some parts of the country,” a home ministry statement said.

“It is clarified that before any settlement is arrived at with Naga groups, all stakeholders including States of Assam, Manipur and Arunachal Pradesh will be duly consulted and their concerns will be taken into consideration,” the statement said.