Manipur’s territorial integrity will not be compromised: Amit Shah 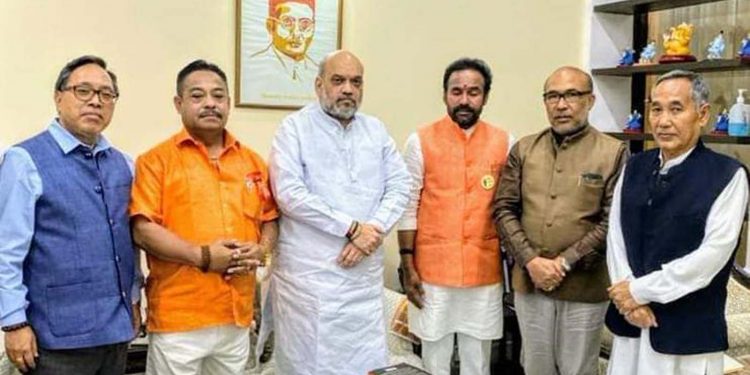 The territorial integrity of Manipur will not be compromised while settling the Naga peace talks, said union home minister Amit Shah.

Shah gave this assurance after a high-level delegation from Manipur met him at his residence late in the evening on Wednesday.

Union home minister Shah told the all-party delegation from Manipur, led by chief minister N. Biren Singh that all stakeholders would be consulted before a final agreement is signed.

“Union home minister has given us the assurance that territorial, administrative and political integrity of Manipur will not be compromised while signing the final peace accord with the NSCN-IM,” said Manipur chief minister N. Biren Singh.

The delegation also submitted a memorandum to Shah raising their concern.

Led the delegation of All Manipur Political Parties to call on Shri Amit Shah @AmitShah ji late in the evening (30/10/2019) and had a discussion on the ongoing Naga peace talks and it's impact on Manipur. Shri G.Kishan Reddy @kishanreddybjp ji, was also present in the meeting. pic.twitter.com/MjWmOKlF9M

“Any final peace accord should not compromise in anyway the territorial, administrative and political integrity of Manipur,” said the delegation in its memorandum submitted to Shah.

Reiterating that leaders across party lines in Manipur would oppose any kind of territorial compromise, the delegation in its memorandum said all the political parties have released a joint declaration raising their protest.

“The peace accord in its final form should not affect, in any way, the composite nature of Manipur and its unique characters,” the memorandum said.

The Manipur Legislative Assembly adopted 12 resolutions in as many sessions held during the period from March 1995 to July 2018 urging the government of India to protect the integrity of Manipur.

Earlier, the delegation also met union minister of state for home, G Kishan Reddy and union DoNER minister Dr Jitendra Singh and expressed their concern over the Naga talks before them.