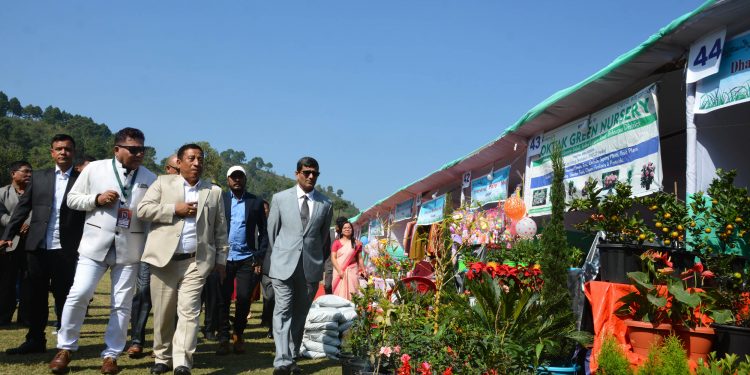 Manipur Forest and Environment Minister Thounaojam Shyamkumar appealed to every section of the society to come forward in conserving, protecting and spreading awareness regarding the migratory birds.

He also lauded the locals of Tamenglong and Noney districts for voluntary surrendering their air guns as part of the conservation process of the Amur Falcon aftermath the hunting incident, hoping that with sincere dedication of the Government officials and full support of the public the State’s environment and wildlife can be conserved and protected.

Minister Shyamkumar was speaking at the inaugural function of Manipur Sangai Festival jointly organized by the departments of the Forest and Tourism at Keibul Lamjao, the natural habitat of brow antlered deer Sangai located about 50 km south of Imphal under Bishnupur district on Wednesday, reports said. Sangai is a state animal.

The Forest Minister felt that the recent hunting of one of the two satellite-tagged migratory birds Amur Falcon ‘Manipur’ at Khebuching in Tamenglong district was an unfortunate incident. These pigeon-sized birds arrive in Tamenglong district in large numbers during winter every year in search of food and adaptable habitation during its migratory passage through the region.

Stressing on the need to conserve and protect the environment as well as the wildlife, minister shyamkumar also appealed to the people to stop using the unconventional methods while fishing in the Loktak Lake.

The festival is organized at five different venues across four districts in the state.

In his speech, PCCF Kereilhouvi Angami said that it is a good moment to organise the opening ceremony of the Manipur Sangai Festival 2018 at the Keibul Lamjao near the National Park to express and convey gratefulness and appreciations of the department to the local villagers for their cooperation, efforts and sacrifices made in protection and conservation of the Sangai.

He hoped that the festival will carry forward the message that it is the duty and responsibility of everyone to protect and conserve the State Animal.

As part of the festival, 60 local stalls including food stalls and 10 stalls of the different State departments were opened while local cuisines, crafts made the locals including toys and other various items were displayed for the visitors.

A book ‘Orchids of Manipur’ and a poetry book ‘O Sangai Sanatombi’ were released during the function.