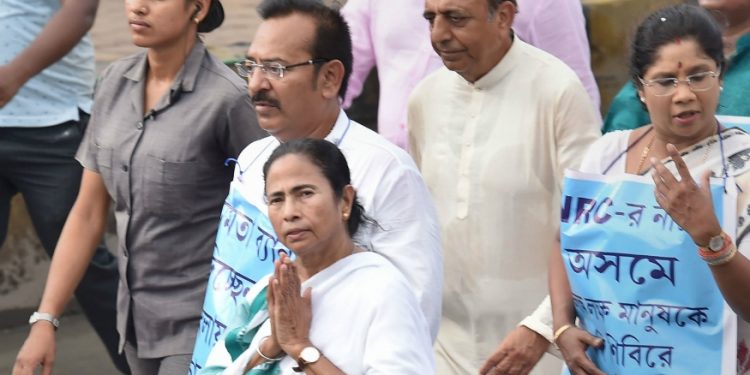 She was seen raising slogans and set a furious pace for the procession.

Mamata has already opposed the NRC as a ‘manifestation of BJP’s divisive politics ‘ and said PM Modi should focus on fixing the economy rather than divert attention by NRC, Kashmir reorganisation and cow politics.

Joined by her party colleagues, the Trinamool Congress supremo started the march from Sinthee More in the northern fringes of the city around 3 pm.

The rally culminated at Shyambazar five-point crossing where a huge statute of Netaji Subhas Bose dominates the landscape. The procession course is believed to be around five kilometres.

The Trinamool Congress leadership, which has been one of the vociferous critics of the NRC, has accused the BJP of trying to divide people through the exercise.

The party had on September 7 and 8 taken out rallies in other parts of the state to oppose the exercise to update the citizenship register.

More than 19 lakh of the 3.29 crore applicants in Assam did not find a place in the final National Register of Citizens (NRC), which was published on August 31.

The Trinamool Congress opposes the BJP’s proposal for a NRC exercise on West Bengal and other parts of India. It also wants ‘all genuine Indians’ to be included in the NRC and alleges that many of them failed to find a place in the NRC because of ‘extreme bias ‘ and ‘cumbersome procedures’.

The party says that Assam’s bureaucracy and vigilante groups in league with BJP-RSS have targeted linguistic and religious minorities to drive them into ‘statelessness’.

Analysts say that the larger number of NRC exclusions have driven the BJP on the backfoot and given a new fillip to the Trinamool’s opposition of the exercise.