KMSS, other organizations to stage mass movement from November 26 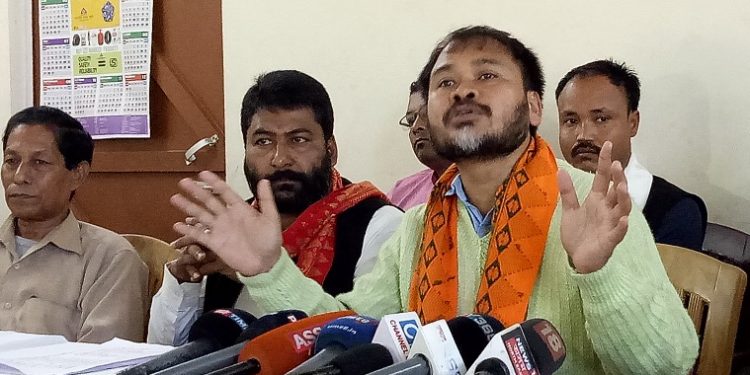 The activists would protest in Tinsukia, Sivsagar, Nagaon and Goalpara on November 26 while in Dhemaji, Dibrugarh, Jorhat, Sonari, Golaghat, Marigaon, Barpeta, Udalguri, Bongaigaon, Cachar, Kamrup and Dhubri on November 27.

Moreover, the activists would stage protest in Hojai district on November 28.

“We (KMSS and other 69 supporting organizations) will continue our protest until the bill is scrapped which would jeopardize the identity of the indigenous people of the State. The BJP-led government’s behaviour towards the greater Assamese community would not be tolerated. They have to withdraw the bill,” Gogoi said.

Gogoi also announced that around 50 activists, who willingly comes forward, would stage indefinite hunger strike demanding scrapping of the bill in New Delhi in the first week of December.

“We have not decided the date yet,” Gogoi said.

It may be mentioned that the KMSS advisor on Saturday announced to launch campaign against the Citizenship (Amendment) Bill, 2016 on social networking sites to mobilize the young and energetic force against the bill from November 26.

The statement for the digital campaign would be read as: “We oppose the unconstitutional and anti-national Citizenship (Amendment) Bill, 2016. Scrap the bill.”

Gogoi, on Saturday, appealed the All Assam Students’ Union (AASU) and other political parties, who raised voices against the bill, to come under one umbrella and to protest against the bill in unison.