The Kamatapur Liberation Organization (KLO) has vowed to continue their fight to regain the right to self-determination of independent Kamatapur state and  restore national, territorial  and sovereign rights of the Kamatapuri people.

The rebel outfit observed ‘Martyrs’ Day’ at its central headquarters on Tuesday at an undisclosed  location somewhere along Indo-Myanmar border to recall the  contributions of the martyrs, who laid down  their   lives for the cause of Kamatapur state.

The self-styled chairman of the KLO, Jiban Singha Koch recalled the contribution and sacrifices of the martyrs of the rebel group.  He said that Koch Kamatapur was never a part of India and was independent till August 28, 1949 and was annexed to India deliberately and forcefully by signing the Koch Behar Merger Agreement and since then the Indian government has been destroying Kamatapuri langage, culture, and history. 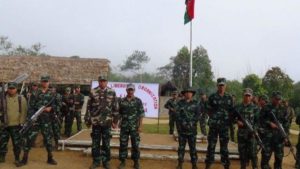 Talking about their national liberation struggle,Koch said  that    KLO is  fighting to regain sovereignty and independence of  Kamatapur since 1993. But, the Indian government   has been launching operations like ‘Kamatapur Crack Down’ and ‘Bhutan Flash Out’ to crush their movement where uncountable freedom fighters have been killed.

Jiban Singha Koch, Chairman, KLO in a press release said, “On this auspicious day I convey my heartfelt revolutionary greetings to all of you. I pay my deep homage to those heroes who have sacrificed their valuable lives for Kamatapur and paid my heartiest due revolutionary tribute to their bereaved family members and also I congratulate all the central committee members, officers and comrades.”

He added, “Today is the day that which represents our heroic noble day of Kamatapuri people. On this outstanding auspicious day, I am extremely empowered by the excellency presence of permanent founder members of the UNLFW.”

He recalled how on December26, 2000, the Indian  forces killed their leaders like Nablu Das, Jiten Das and Kondura Das and since then, on this day every year the  ‘National Martyrs Day’ is observed as they inspire them  to continue with the national liberation struggle.

He said their movement was to get the right to national self-determination and restore national, territorial and sovereign rights as these rights  are  protected by  the UN General Assembly and International conclaves.