Santana Sharma said the children aged 11, 9, 6 and 3 will be in their foster care for five years before they can be formally adopted 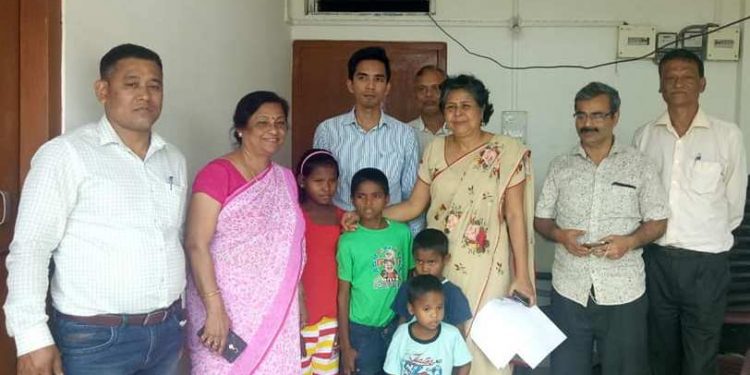 Monica, Badal, Kundan and Chandan have had their names changed to Morom, Seneh, Aador and Hepah.  But that is not the only thing which has changed.

The four siblings orphaned in the hooch tragedy which claimed more than 150 lives in Golaghat and Jorhat districts recently, have been adopted by a compassionate couple here  who  could not bear the thought of the  four,  one sister and three brothers,  being given up to different people for adoption by the Golaghat  Child Welfare home.

While the couple Santana and Debabrata Sharma, a noted writer and activist, are exploring the joys of parenthood and experiencing teething troubles as all first time parents do, the children themselves find in an environment different from the tea garden in which they had been brought up and more importantly have stepped into the precincts of a school for the first time.

Santana Sharma said that the children aged 11, 9, 6 and 3 will be in their foster care for five years before they can be formally adopted.

“For various reasons we did not have children of our own, one of them being that we were extremely busy both in our personal and professional lives and the other being economic.  Now we feel that we would like someone to come home to but bringing up an infant was out of the question (both are in their 50s) and when we saw four of them being shown on TV and the anchor asking who will take care of them,  we asked ourselves, why not us,” Sharma told Northeast Now.

Sharma said that what spurred them was the thought of them getting separated if given up to different foster homes.

The formalities were completed on April 22 and they were brought home the same day.  The couple have also decided to celebrate April 22 as their birthday, “it also happens to be Lenin’s birthday.”

For Santana, language is also not a problem as she was herself brought up in a tea garden and knows a smattering of the language of the tea community.

After being brought home, the children have had to be dewormed, deloused, cleared of skin infections and fed properly because of malnourishment.

Like any other parent, the Sharmas are also facing bedwetting, a big problem due to the inclement weather, as well as   trying to bring in discipline into the hitherto unruly lives of the four.

“The youngest one needs toilet training and the one elder to him might be bedwetting due to insecurity and may need love and psychotherapy. One can sense their anxiety and fear. Especially today when officials came from Golaghat to check, you could see the fear of being taken back more than other days,” she said.

Regarding the eldest, a girl, Santana said that because she was more used to taking care of her younger siblings, she was called on to look after them and the babies of her extended family as well and cooking, when it came to studies, her attention span was less.

“I cannot blame her as the school from the Halmira tea estate where they had resided was at a great distance away.  It was not possible for her to go or children younger to her, especially as both her parents went to work,” Santana said.

The younger ones were faster on the uptake.  All of them are going to Jorhat Jatiya Vidyalaya at Choladhara and are in the same class.  Once the elder ones improve, they will be admitted to higher classes.