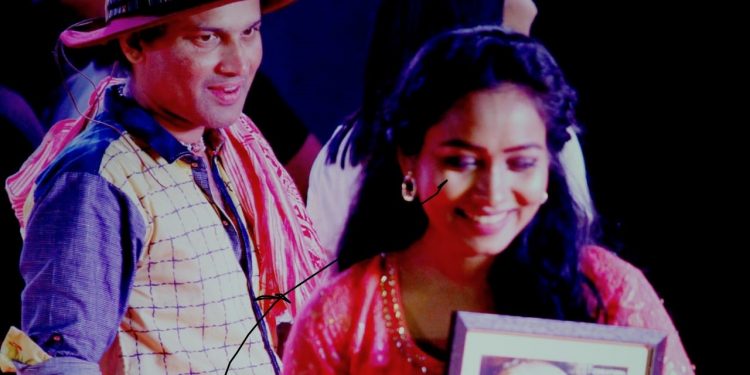 Jerina Boruah was the sister of Zubeen Garg in Kanchanjangha — this is the final impression the audience in Kolkata gathered from the film above every other theme else in the film.

In fact, Jerina’s powerful and sensitive acting feat may be responsible for this in the Assamese mega master blaster based on multi-layered social issues.

That is chiefly because of the brilliant acting feat of Jerina who played the role of Antara (Zubeen’s sister Jonki Borthakur in real life). Zubeen’s efforts to record harsh reality in his musical performances have not been without controversy. But this time the sister-brother love theme melodises the harsher issues.

The beginning of the 21st century has seen Bollywood style Assamese movies hitting the screens. Still it has not been able to compete in the market significantly overshadowed by the larger industries as Bollywood.

After Bharat Ratna Bhupen Hazarika, now Zubeen Garg, is surely going to be the most important cultural ambassador of Assamese music especially after the release of this Assamese mega musical master blaster as he takes  Jollywood to an incredible height after Bhupenda had stirred whole India after his music direction and singing in Rudaali.

It is now going housefull in all the mega cities–Mumbai, Kolkata, Hyderabad, Bangalore outside Assam. The shooting of the movie was taken in Tezpur town as well as the villages. The mahurat of the movie was done in Barpeta in March 2018.

Viewers are giving huge response to the film after its release. Usually musical film has less action. But Kanchanjangha, directed by Zubeen, who also plays the role of the protagonist, is produced by himself along with Garima Saikia Garg under the banner of “I Creation Productions”.

The film is based on socio-political issues faced by this generation. The central focus is, however, on brother-sister love. Fans are comparing this film as Mon Jaai Part-2. As Zubeen Garg previously mentioned in an interview, the main theme of both Mon Jaai and Kanchanjangha is the same, but Kanchanjangha’s storyline is different.

Female protagonist Jerina Boruah with her dance and acting expertise made the film more engaging. In this debut Jerina carved out a niche for her by playing the role of Zubeen’s sister Jonki. She is an artist par excellence. Born at Machkhowa in Lakhimpur in 1993, she graduated in Assamese and now engaged in the study of law.

She got her expertise in Satriya dance and at the same time showed her curiosity about Assamese culture and heritage. She has also published a book titled, Dr Bhupen Hazarikar Geetot Sanskrit Chetonar Xandhan.

She carved niche as a dance artist in her first acting performance in Sourav Jyoti Baruah’s Topal album which may be called her first cultural debut. She also performed in short films Xondhiyar Xur, Popiya Tora, Xondhikhkhon and Miracle.

In the Jonak Channel she is regularly performing as a serial artist in Monor Nijanot Jonak.  Besides Assamese she acted in the Hindi serial of Guwahati Doordarshan Mon ki Ura.

She participated successfully in the Sattriya programmes of Sangeet Natak Academy.

Recognition came at this young age for Jerina Boruah.  In 2016 she got the Best Performer of the Year in Classical Dance and in 2017 she got the Best Actress Award. Her many book of poetry and novels are in pipeline.

The drama team of the village also inspired her to participate in many programmes from her childhood days. Her maju mama persuaded her to sing with orchestra and that probably inspired her to dream high. Jerina’s powerful acting in this musical film adds to the film a totally new dimension. An inborn talent Jerina mesmerised the audience no less by her dancing feat.

A sudden mishap caused the vacuum in Zubeen‘s life and the untimely death of Jonki remains a deep wound in his mind and heart. This vacuum for an ever talented sister’s love is made immortal now in Kanchanjangha and the film can be said ‘a stupendous celluloid recreation of brother-sister love’ reminding distantly of Yaadon ki Barat and Jerina did her part well as Antara on the celluloid who could be Jonki Borthakur in real.

But the film transcends the personal to reach a social height in its multi-layered story -line.

Anirban (Zubeen himself), an ambitious, studious guy, becomes rebellious to fight against the injustice happening in the system and the society. It also ropes in APSC scam which had been allegedly happening in Assam for many years and strict action was taken against the accused in 2017.

The story goes as the boy, facing the injustice of the socio-political situation, sacrifices the value under which he has been raised and tries to overcome the problems of the society.

It is significant that Kanchanjangha being a musical film never for a moment ignores the social reality and there is constant focus on the contemporary social problems while the rural scenic beauty of Assam captivates the mind of the audience.

Unemployment of even highly educated youth, plight of the poverty stricken upper caste and the storyline veers around ‘land mafia’ promoter goons. Human values like love and affection are lost in the crazy avarice.

As in Galsworthy’s The Silver Box there is one law for the rich one for the poor, in Zubeen’s film too we see the same evil nexus between the wealthy sections with the lawgivers. The father of the hero in this film needs 25 lakhs of rupees for his son’s job although his son is a brilliant meritorious one and did excellent results.

His old father finally agrees to sell his land and property for his son’s job but the mafias forcefully and illegally occupied his land. What is worse they killed his father. Here is the real beginning of the story when the hero appears and fights against all evils of the society.

Songs and dances are integral to Assamese culture and heritage and here lies the challenge for Jerina, the new comer, in film and she with her devoted efforts excelled.

At least six super-hit songs are presented with all idyllic graphics representing Assamese rural life and cultural heritage. The second time Assam nay India is listening to the sound of music and credit goes to Zubeen and no less to Jerina who made them graphical and lively by her choreographic expertise.