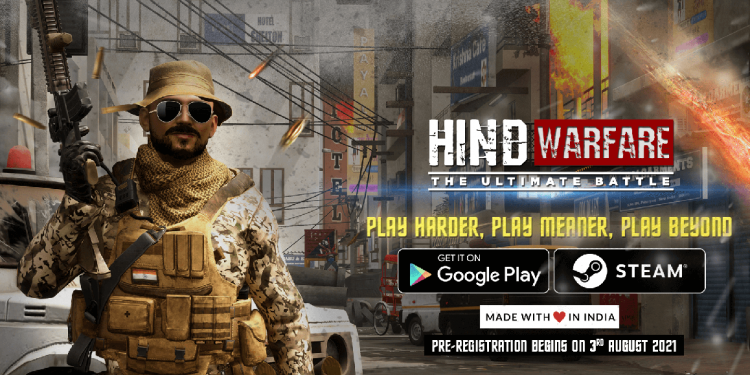 India’s first ever first-person/third-person shooter game Hind Warfare with all Indian maps is coming up soon.

The shooter game is entirely inspired by the bravery of Indian Commanders and their killing instincts.

Hunting for weapons and equipment to kill the opponents while saving themselves remain the fundamental spur throughout the game.

The locations/maps were chosen by keeping the interest of a gamer from each corner of the country in mind. The nature and elements of each location are very diverse from each other.

“All the maps are designed and developed with very thorough research, planning, and execution. Keeping photo-realistic locations as our prerequisite, we have been able to develop all the maps with high details, authenticity, and technical prowess,” the developers of the game said.

There are four maps:

Meghalaya: The mountainous terrain along the southern part of the Shillong Plateau. Living Root Bridge is one of the main attractions of this map.

Kuldhara: An abandoned village in the Jaisalmer district of Rajasthan.

Some 300 years ago, it used to be a prosperous village of Paliwal Brahmins under the state of Jaisalmer. A ghost town now, it holds a charm with the ruins of castles and fortresses.

Vizag Port: India’s third-largest port by volume of cargo handled and largest on the Eastern Coast.

Proposed by the British Government after the World War I, it was built in 1927 to facilitate the export of manganese ore from the central provinces.

Paharganj: A neighbourhood of central Delhi, which is popular with low-budget travellers for the cheap lodgings, an epicentre of the city’s drug crime, sexual assaults and sex trade.

Hind Warfare V1 has a total of 8 characters including 7 male and 1 female.

All the characters are very divergent in skills, physical appearance, and are inspired by the Special Forces of the Indian Army.

“Although, we are not representing any officers, ranks, or force unit specifically, we will be releasing more characters from other professions and civil settings in future versions,” the game developers said.

In Hind Warfare V1, players will compete with each other under 4 gaming modes:

Domination: Two teams compete for control of three locations on the map marked with lettered waypoints: A, B, and C. Earn score for each zone that your team controls.

Combined arms: Domination on a large scale; this classic game mode is scaled up for 6v6 Combined Arms action. Domination features two teams capturing objectives and defending them from each other.

Team Deathmatch: Two teams battle each other in an elimination-based challenge. The first team to acquire the target number of kills wins the match. If both teams have the same score when the timer runs out, the game ends in a draw.

Free-for-all: It’s every operator for themselves. The first player to earn the target number of kills, or who has the most kills when the clock runs out, wins the match.

The logo was released on July 12, followed by the first teaser launch.

The important dates for Hind Warfare:

The first trailer of Hind Warfare (www.hindwarfare.com) will be launched on August 2, 2021.

The pre-registration of the game will start on August 3, 2021.

The game testing will begin on September 1, 2021 and the final game will be launched on October 1, according to the developers of the game.

“Our dream of developing a video game entirely in India is finally coming true. All the maps are based in India and you can feel the thrill of playing in our own narrow lanes, natural landscapes, historical ruins and much more,” the founder, Rahul Mahipal, said.

Rahul Mahipal, since his start, has worked tirelessly towards creating something unique and of greater value than what the current market demands.

His first venture, the Creaticity Studio, was launched in 2012 with Girish Jain.

Girish remained a core team member of his all endeavours too.

In 2015, he started the Creaticity Productions under which they helmed some projects including the globally acclaimed, Jaipur Hyperlapse in 2016.

They ventured into TVCs, high-budget corporate videos and music videos.

In 2019, Mahipal expanded his workforce with TCP DIGITAL – a successfully running digital production house based in Delhi NCR.

The year 2020 brought the inception of foraying into the gaming industry.