The three categories where participants competed were men’s 35 singles,45 singles and 55 singles competitions 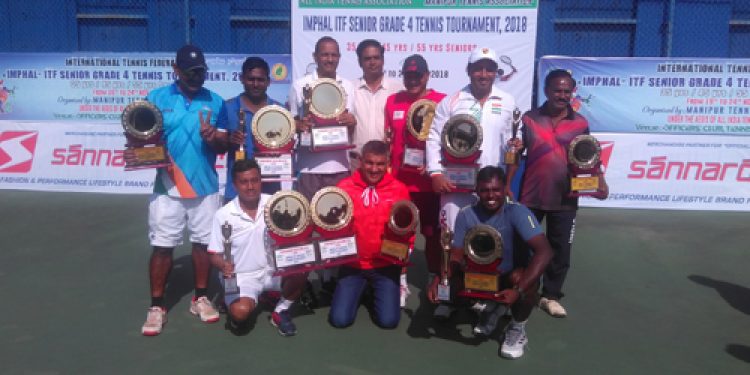 The five day Imphal-ITF senior grade-4 which was organized by Manipur Tennis Association (MATA) under the aegis of All India Tennis Federation at tennis court of Officers’ Club, Lamphelpat in Imphal under Manipur’s Imphal West district concluded on Friday.

The tournament started from November 19 with active participation from 80 tennis players including many seeded players from parts of the country.

Manipur Tennis player Tuleswar Singh Thongbam claimed the above 45 years men’s singles title by defeating Karan Kulwant Singh 6-0,6-3 in the finals of the tourney which was played on Friday. It may be mentioned that Tuleswar beat Hatinder Panwar in the semi finals.

In the men’s singles final clash for above 35 years category, Dilip Mohanty who beat Syed Zaidi in semi-final, defeated Kannan Sethu in a straight set of 6-1,6-0 to win the title while Rajan Beri won men’s single title in 55 years singles competition. In the final match played this morning, Rajan Beri beat Sharad Tak 6-4,6-3.

In the doubles competition of the tournament, Dilip Mohanty and Bal Krishnan Bhatia emerged above 35 years men’s doubles champions while the doubles title for above 45 years category went to Thongbam Tuleshor and Kulwant Singh.

In brief speech on the valedictory function played for the first time in the state capital, Administrator Jarnail Singh lauded the effort of the state players as well as the other participating players. He also briefly narrated how the tennis courts in Manipur were developed when he was serving in the state some time ago.