Pilferage of fuel resumes in Karbi Anglong along Assam-Nagaland border 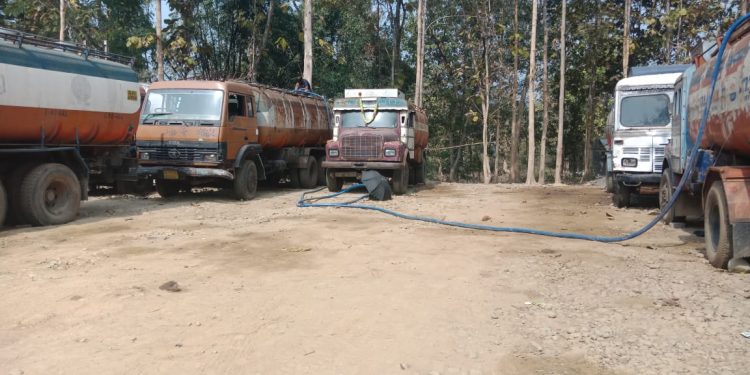 Pilferage of diesel and petrol from oil tankers have resumed at Khatkhati on the Assam side of interstate border of Assam-Nagaland under Khatkhati police station.

It may be recalled that several shops and a few tankers and bikes were burnt down in two incidents of fire at Khatkhati two months back.

The illegal activity operated by interstate oil mafia has been going on under the nose of the police and district administration by the side of National Highway 39 for a long time. Previously two incidents of fire started at two sites nearby at different days. The fires were suspected to start while oil was transferred illegally from oil tankers.

The illegal activity has started after a hiatus of two months. Some journalists visited the site at Khatkhati RCC bridge and talked to one Bipin who was engaged in siphoning oil with a plastic hose into a drum. Bipin said that he was doing it after the police gave him permission to do so.

If the police is allegedly condoning the illegal activity then another fire may start in which lives may be lost.

Khatkhati in Karbi Anglong at Assam-Nagaland border is a known hub of illegal activity in drugs, illegal trade in IMFL, transit point of stolen vehicles from all over India and gun running.