A home-grown soldier will be the best sentinel: Arunachal Governor

A home-grown soldier will be the best sentinel, doubling the safety and security of the state and the nation, said Arunachal Governor Brig (Dr) B D Mishra (retd), while exhorting and motivating the youth of the State to join the armed forces.

The Governor also informed the youth of the vacancies that have appeared in the Indian Army recently during his visit to Tawang on Friday.

Mishra, on his second day tour of Tawang also interacted with the heads of various departments and reviewed the central and state government sponsored developmental programmed and projects which are being implemented in Tawang on Friday.

He said that the government officials are pillars of development.

The Governor also exhorted them to put in their best effort to ensure that the last person on the last rung of the society benefits from the welfare schemes and programmes.

“A target has to be set and people have to be motivated and take steps for progress,” he said.

The Governor emphasized that priority must be given to education and healthcare. 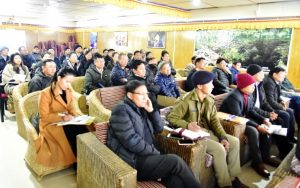 “The heads of the departments must see that every child has an opportunity to develop to their full potential and excel in life,” he further said, also advising the officials to go the extra mile to improve female literacy rate in the State.

The Governor, while advising for free and fair police personnel recruitment for effective delivery system, also stressed on providing proper accommodation facilities to the policemen and ensure ideal policing.

Earlier in the day, the Governor met the representatives of various security forces and agencies stationed in the district.

He advised them to be alert, watchful and proactive and to instil sense of security amongst the people for peace and progress of the State.

He also emphasized on continuing the excellent civil-military relationship, which is ‘happily in place now’.