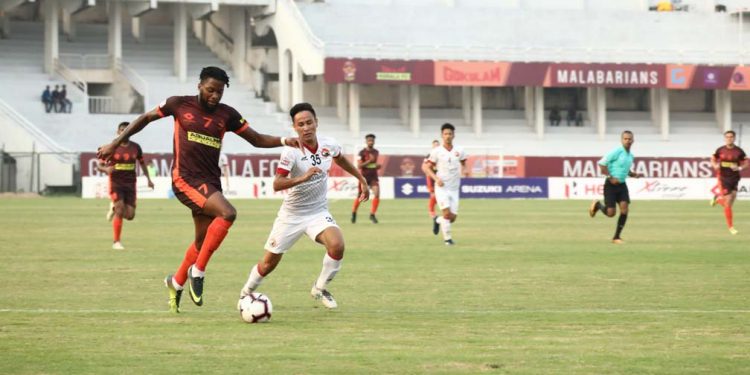 In the Hero I-League encounter played at the EMS Corporation Stadium in Kerala, Gokulam Kerala defeated Shillong Lajong FC by 3-1 on Sunday.

Shillong Lajong was without their captain Samuel Lalmuanpuia on Sunday due to illness and Sheen Sohkung stepped in place of him in the starting line up. Gokulam Kerala had the physical advantage in Sunday’s game and dominated proceedings in the first half.

Gokulam’s Antonio German and Suhair kept poking the Lajong’s defence and were unlucky not to convert their chances. Lajong nevertheless created 3 good chances in the first half. Phrangki Buam’s curler in the 30th minute was tipped over by the keeper for a corner. In the 36th minute, Samuel Lyngdoh Kynshi found space forward but his shot with the left foot lacked power and didn’t trouble the keeper.

Sheen also had the opportunity to give Lajong the lead after some quick short passes with Lalawnpuia Hnamte but Sheen’s shot from outside the box went inches wide of the post, the report stated.

After applying majority of the pressure, the host eventually took the lead in the 43rd minute through Gani Ahmed who converted from a few yards in front of goal. The first half ended 1-0 in favour of Gokulam Kerala.

The hosts started the second half strongly with Brazilian, Castro and Antonio German combining well in attack. They eventually doubled their lead in the 56th minute after Antonio German’s shot from the right deflected off Samuel Lyngdoh Kynshi and into the net.

Shillong Lajong made their first substitution when they brought on Nabin Rabha for Mahesh Singh in the 63rd minute.

Gokulam scored their third goal of the match through S. Rajesh who met a cross made by Gani Ahmed on the left in the 65th minute. Lajong’s Kenstar got injured and was replaced by local lad, Meban Wahlang in the 69th minute to make his I-League debut.

Suhair could have made things worse for Lajong after he was left unmarked by Lajong’s defence, but his shot hit the bar and over. Despite trailing by 3 goals, Lajong youngsters kept creating chances patiently and were rewarded with a goal in 78th minute.Phrangki Buam pulled one back for Lajong after running inside the box and converting from Sheen Sohktung’s pass.

Shillong Lajong made their final change with Bonison coming on for Samuel Lygdoh in the 81st minute.

Alison Kharsyntiew’s boys applied pressure towards the end but were not successful as the full time score remained 3-1, stated the report.

Shillong Lajong youngsters will have to improve their performance away as they travel to Goa for their next match against Churchill Brothers on November 15, 2018.