Gold smuggling has become rampant from across the Myanmar border 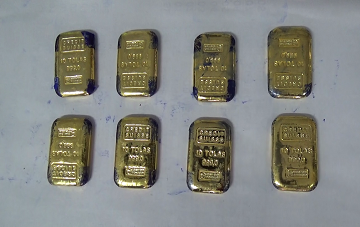 Reports stated that a person called Harish Mahmood was carrying the gold biscuits in the Kamrup Express train.

The GRP personnel seized the gold biscuits while it was on a routine check.

Harish Mahmood hails from Kannur in Kerala and on grilling he informed that he was smuggling the gold biscuits to West Bengal.

He further informed that he boarded the train from Dimapur in Nagaland and was travelling to Kolkata.

Mahmood was handed over to the Customs Department authorities along with the seized gold.

Of late, gold smuggling is becoming rampant from across the Myanmar border.

A probe by the Directorate of Revenue Intelligence (DRI) revealed that a “strong network” of international smugglers from Myanmar is using the Northeast and North Bengal’s borders with Myanmar, China, Bhutan, Nepal and Bangladesh to smuggle gold which are in huge demand in clandestine gold markets.