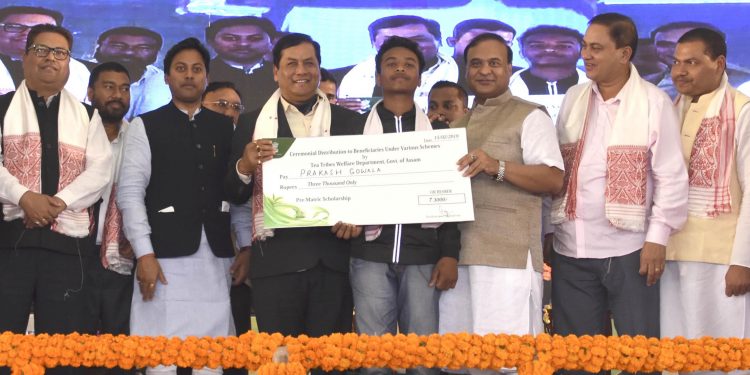 Assam chief minister Sarbananda Sonowal on Friday said the tea community has made lots of contribution to the greater Assamese society and the young generation of the community must take it upon themselves to bring about transformation through education and knowledge.

“Our government is committed to facilitate required infrastructure for ushering in a period development in the tea garden areas. The line sardars also have a crucial role to disseminate information about various schemes launched by the state government for tea community,” said chief minister Sonowal on Friday while inaugurating the second phase of Asom Sarkar Chah Bagicha Dhan Purashkar Achoni at Sarusajai Sports complex in the city.

Notably, during the first phase of the scheme an amount of Rs 2,500 was deposited in 7 lakh bank accounts of members of tea community of 752 tea gardens in 26 districts of the state. In this second phase, the same amount would be deposited in the bank accounts by the state government.

The chief minister also launched the scheme for distributing smart phones to a total of 11,858 line sardars of the state along with distribution of non geared scooters to meritorious girl students, handing over of admission letters to 200 girls for GNM courses, scholarships to pre matric and post matric students, etc.

Calling on the young generation of tea community to empower themselves with knowledge to excel in today’s competitive environment, Sonowal informed about various initiatives launched by Prime Minister Narendra Modi like Skill India, Startup India, Digital India etc for youth empowerment and young generation must acquire skills to take advantage of the positive situation arising out of central government’s big investments in the natural oil and gas sector.

He also urged them to follow the footsteps of tea community leaders like Simon Singh Horo and Santosh Kumar Topno in working for betterment of the community.

He also highlighted the budgetary provisions kept for the tea community’s development in this year’s budget.