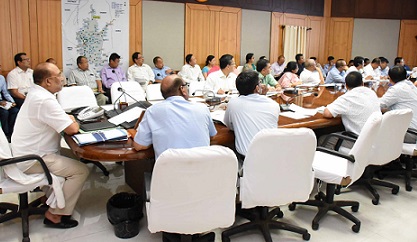 The overall in-charge of the mission and Additional Chief Secretary (Works, Forest and Environment) Suhel Akhtar gave a power-point presentation on the progress of the mission at the meeting.

Chief Minster N Biren Singh heard the problems and suggestions from the nodal officers, Deputy Commissioners (DCs) and other officials regarding proper implementation of the GTV mission and delivering services and benefits to the masses.

The CM also directed the officials to minimise the number of pending cases.

Regarding construction of ponds for fish farming, the Chief Minister asked the Department officials to depute field survey teams to assess whether the villagers’ requests are feasible or not.

The Chief Minister also said that more additional funds would be released to the DCs for organising GTV camps.

A total of 2,45,975 beneficiaries were enrolled during the camps held till July 10, 2018 out of which services/benefits had been delivered to 1,78,334 people and 58,688 applications are still pending. It is said that 8851 applications had been rejected due to non-feasibility.